If all you know about Sweden is IKEA and H&M…here’s something else: the capital Stockholm is a vegan paradise. It’s a city full of nature, and we were lucky to have spent two weeks enjoying what it has to offer.

Before coming to Stockholm, I was a bit concerned about finding vegan options – until I realized I can just sit back and relax because not only are vegan/vegetarian restaurants easy to find, most regular restaurants offer at least one vegan option. If you really can’t find anything, it’s also not hard to make a request. I’m sure restaurants can improvise. And the good thing about Sweden is that everyone speaks English, so you shouldn’t have any problem with communication. If you have food allergies, more often than not allergens will already be listed on the menu.

Living in Sweden is cheaper than living in Hong Kong, but that doesn’t really say anything! Thankfully we were able to stay with friends to save cost and feed ourselves with delicious vegan meals everyday. The average cost below is for your reference only. Check out our recommendations and tips! 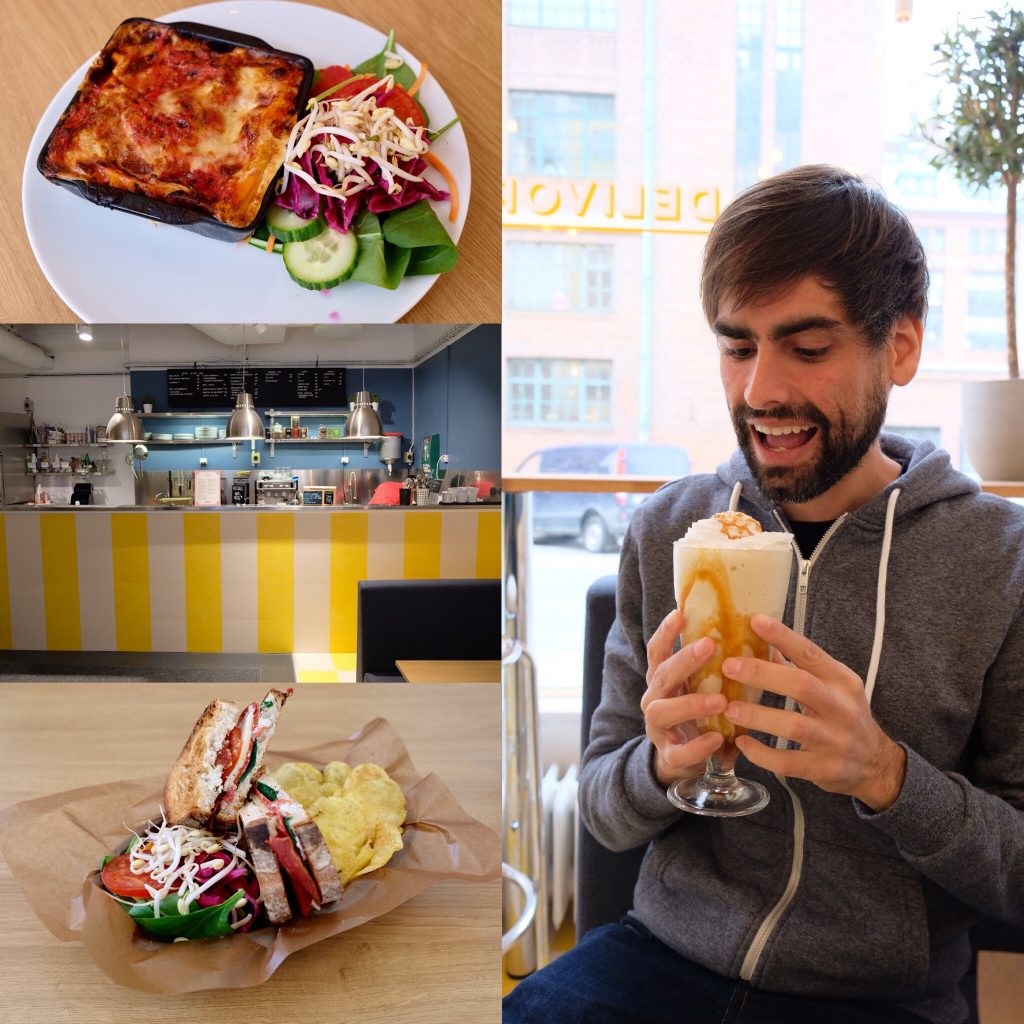 Delivore was one of the restaurants closest to where we were staying, so we left it for the last day we were there. Thank goodness we made it – I had the best Oreo mylk shake EVER and one of the best lasagnas.

There’re two branches of Delivore, one of which is integrated with vegan grocery store Goodstore (which we’ll talk about later), and another one is right across the street from another Goodstore. The restaurant is small and cozy, perfect for reading, working or just hanging out. 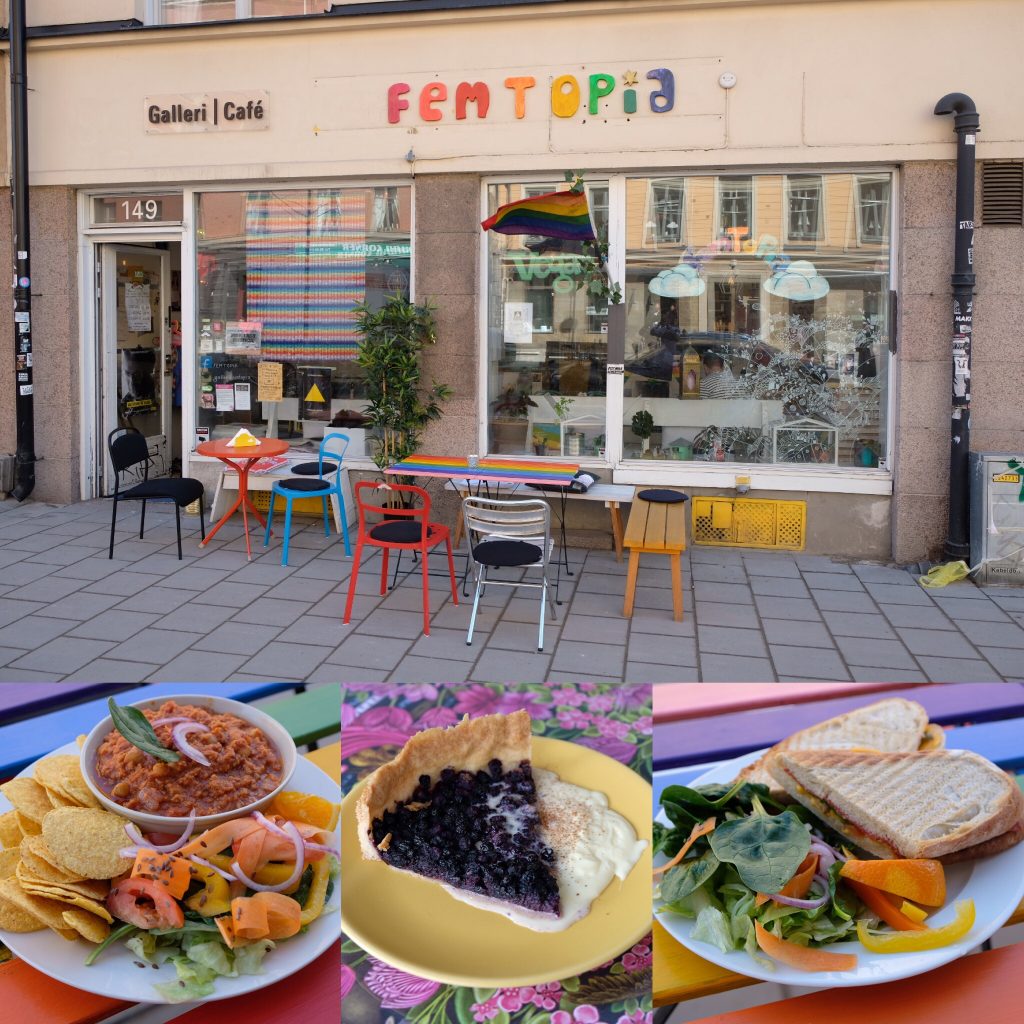 All social justice movements share the same core – to speak up for those whose voices aren’t heard. Here at FEMTOPIA, veganism and feminism are combined and translated into yummy plant-based food and art.

The entire restaurant is very colorful, with dishes named after My Little Pony characters. Narayan even named their blueberry pie with vegan vanilla yogurt the best he has ever had. 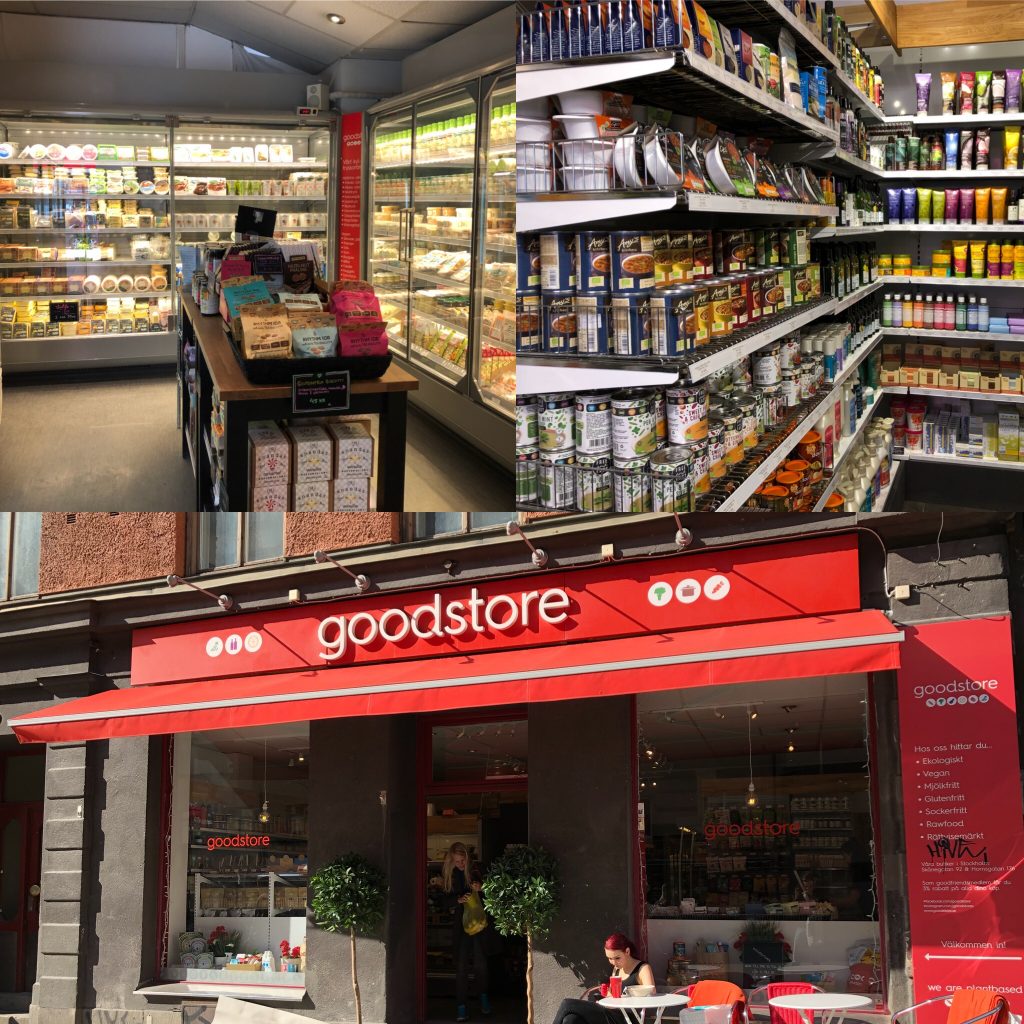 If you haven’t been to a vegan grocery store, you may lose your mind here. Even though I used to live right next to a Veganz in Berlin, I still couldn’t contain my excitement when I stepped into Goodstore. Here you can find local products as well as chocolate from Belgium, hazelnut spread from the Netherlands, cookies from the UK, and marshmallow, cheese, mock meats, yogurt, mylks, fresh produce…you name it. Should I plan my move already?!

Not only does it offer vegan products, but it also highlights organic, fair-trade and gluten-free options. There’re two stores on the same island. The one at Åsögatan 116 is integrated with Delivore and is bigger. The one at Hornsgatan 176, even though not integrated with Delivore, is right across the street from it and Femtopia. I’ve made a video about it in Mandarin in case you want to check it out (or practice your Mandarin). 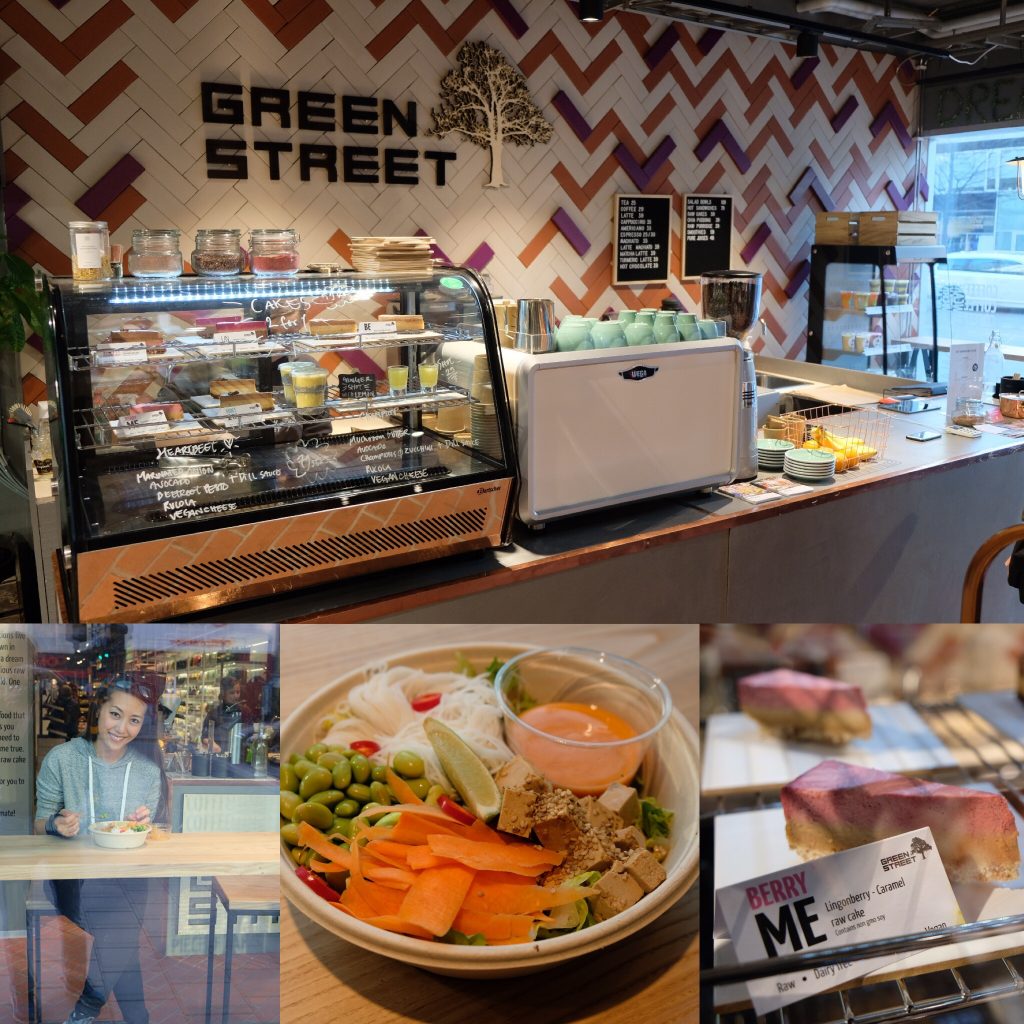 If Stockholm is way too exciting and you just wanna grab a quick lunch to go, GreenStreet Stockholm might be perfect for you!

It’s listed as a vegan cafe on HappyCow, but since there’re only 5 seats, I’d advise that you get take-out of sandwiches, salads, or various raw cakes.

It’s also right inside of Happy Food Store, a health food store featuring many vegan products including cosmetics. The store is not all vegan, but it looks super interesting. Too bad it was already closing time when I got there. 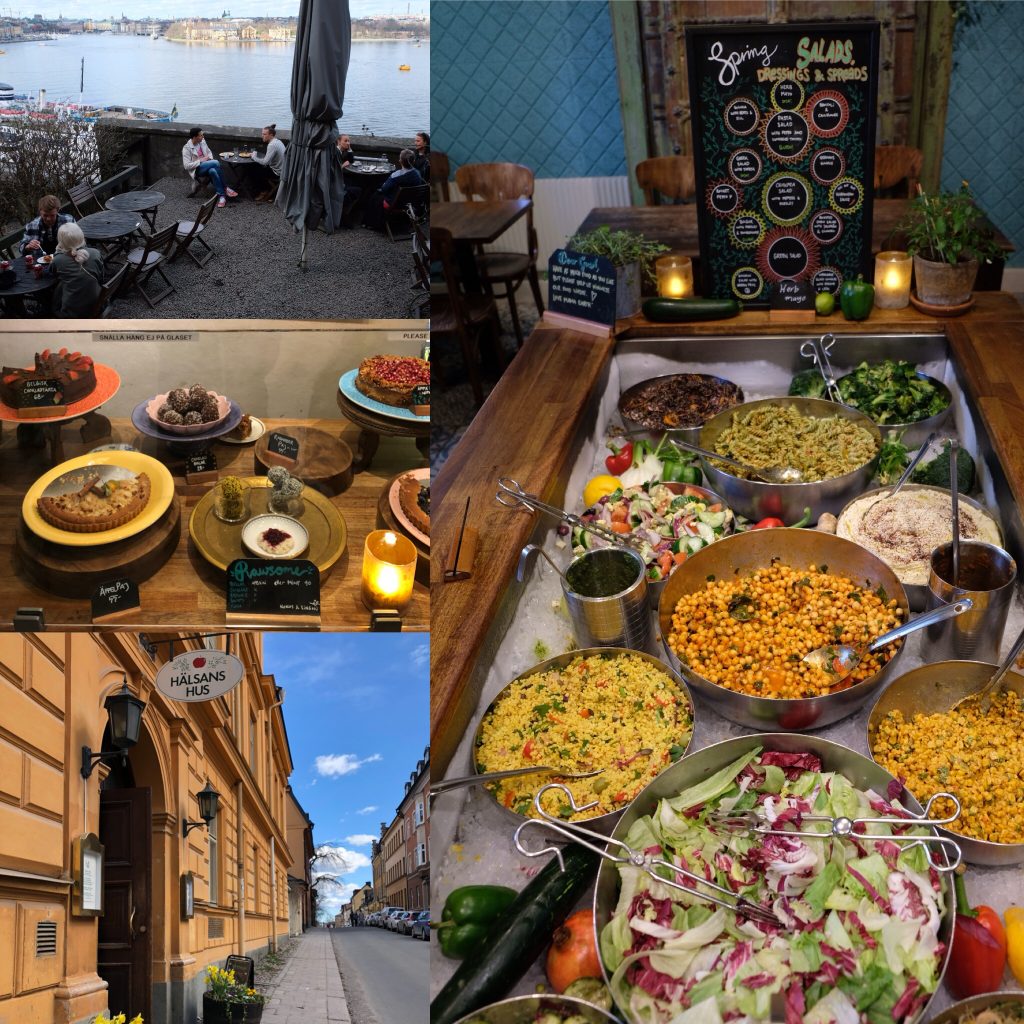 Imagine the wonderful feeling of being at a vegan buffet with a plethora of options including pasta, salad, grilled vegetables, hummus and more…that’s what you’ll get at Hermans Restaurang & Trädgårdscafé in Stockholm. Just writing about it now makes me want to go back!

With lots of super yummy dishes, the restaurant is located right by the sea with an amazing view. I guess the only thing that can be improved would be the indoor seating area since the way tables were arranged was a bit too crowded.

The conclusion is that it’s definitely one of my favorite restaurants, if not my #1.

Average cost: USD 22 (desserts and coffee are not included in the buffet)
Facebook: https://www.facebook.com/hermansgivepeasachance 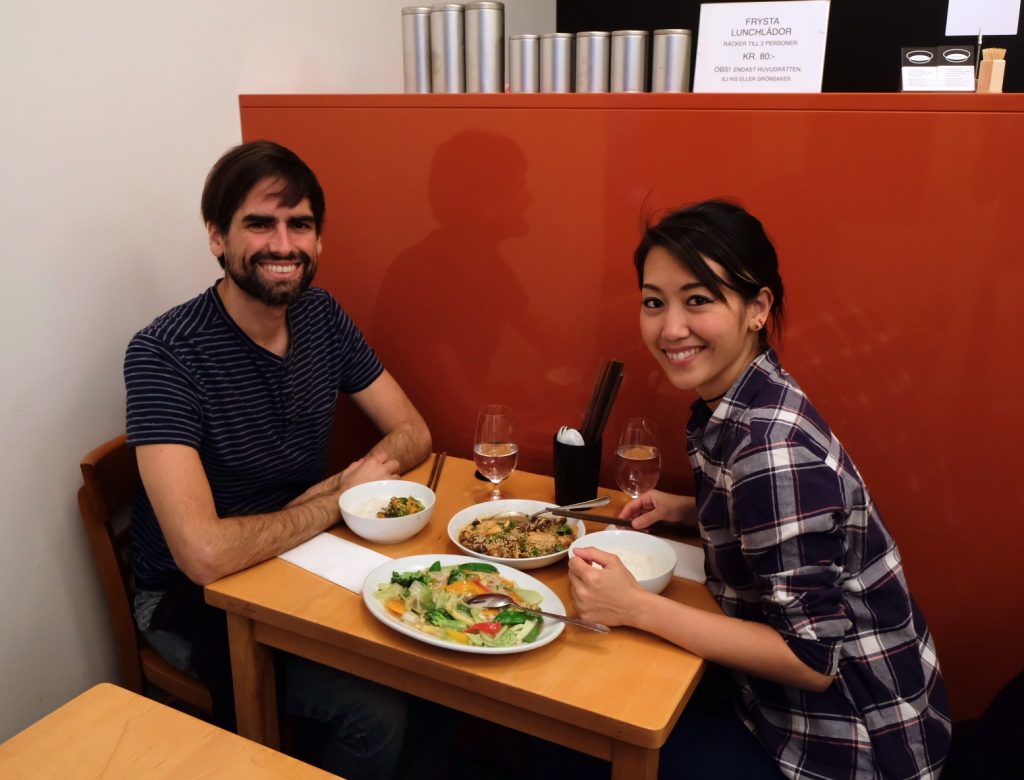 The word “lao wai” in Chinese means “foreigner,” and I guess that’s perhaps their main target audience. Owned by a Taiwanese Dutch, the dishes are what you would see at a typical Chinese restaurant such as stir-fry vegetables and tofu, plus vegan ice cream. Main dishes come with white rice.

It was delicious, and if you’re not used to Chinese food you may find it impressive, as how I was told by a few Swedish friends. (I think I can cook similar food like this at home though.)

This was the most expensive meal we’ve had in Stockholm. Having Chinese food to celebrate our 3-year-and-8-month partnership seemed about right, since we met in Beijing after all. 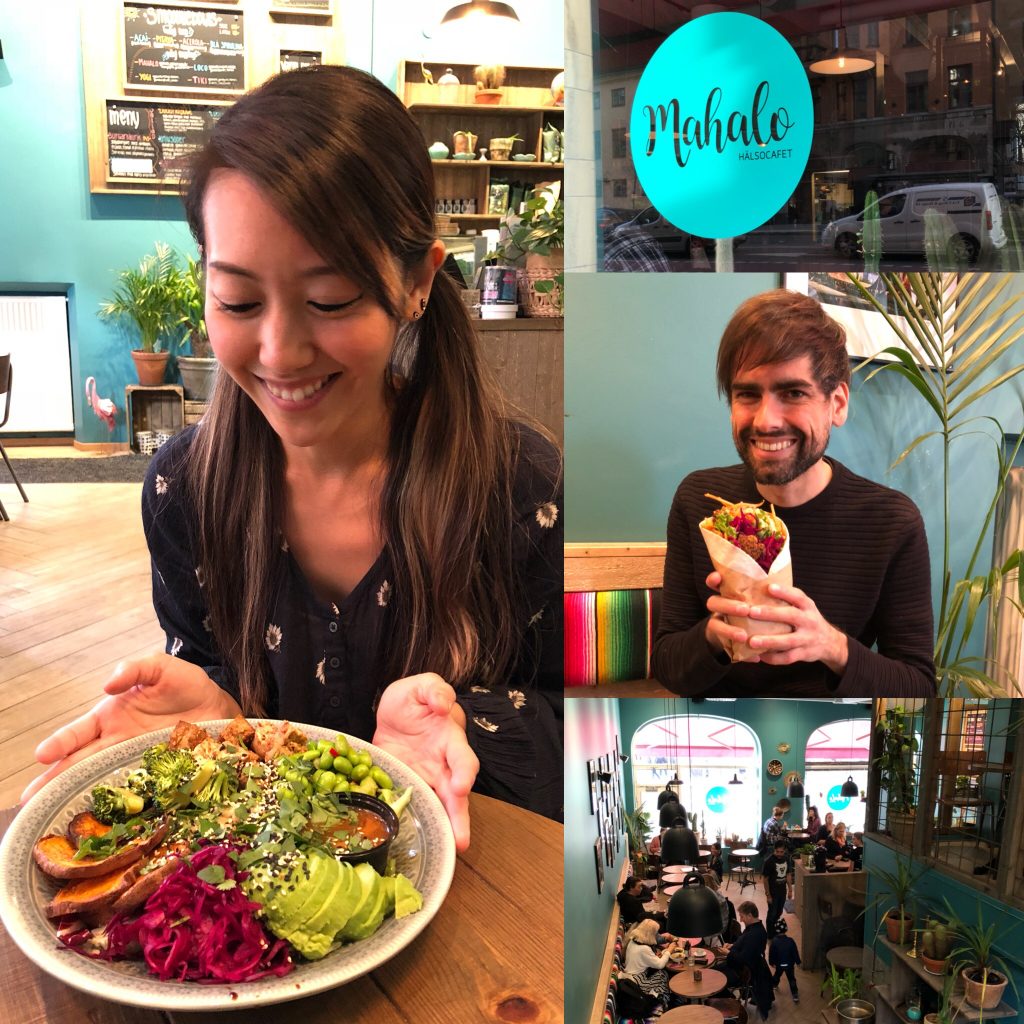 If I had a vegan café, I would probably want it to look something like Mahalo Sthlm. It’s a vegan paradise of burgers, salad bowls, wraps, raw cakes and smoothies – you name it.

We loved the Buddha Bowl and falafel wrap we ordered. Sitting on the deck and enjoying a healthy meal in the sun? Sounds almost too good to be true! 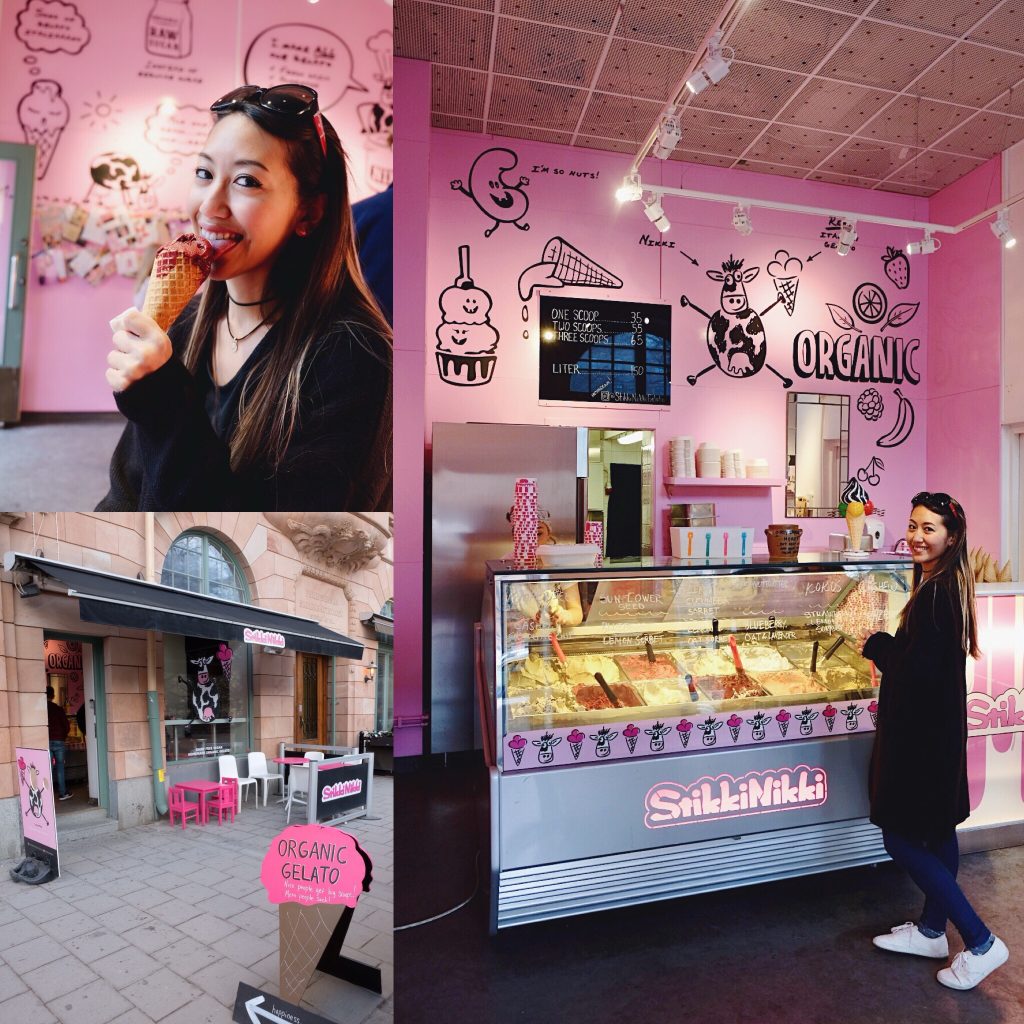 What a pleasant surprise to see a vegan, organic gelato store StikkiNikki in Stockholm! They have several stores in the city with vegan options, but the one at Mariatorget is the only all-vegan store so far.

Of course we experienced a little bit of FOMO when choosing two scoops out of dozens of flavors, but settling with cashew and blueberry + lavender was a good choice! A bit too sweet for me, but delicious regardless. 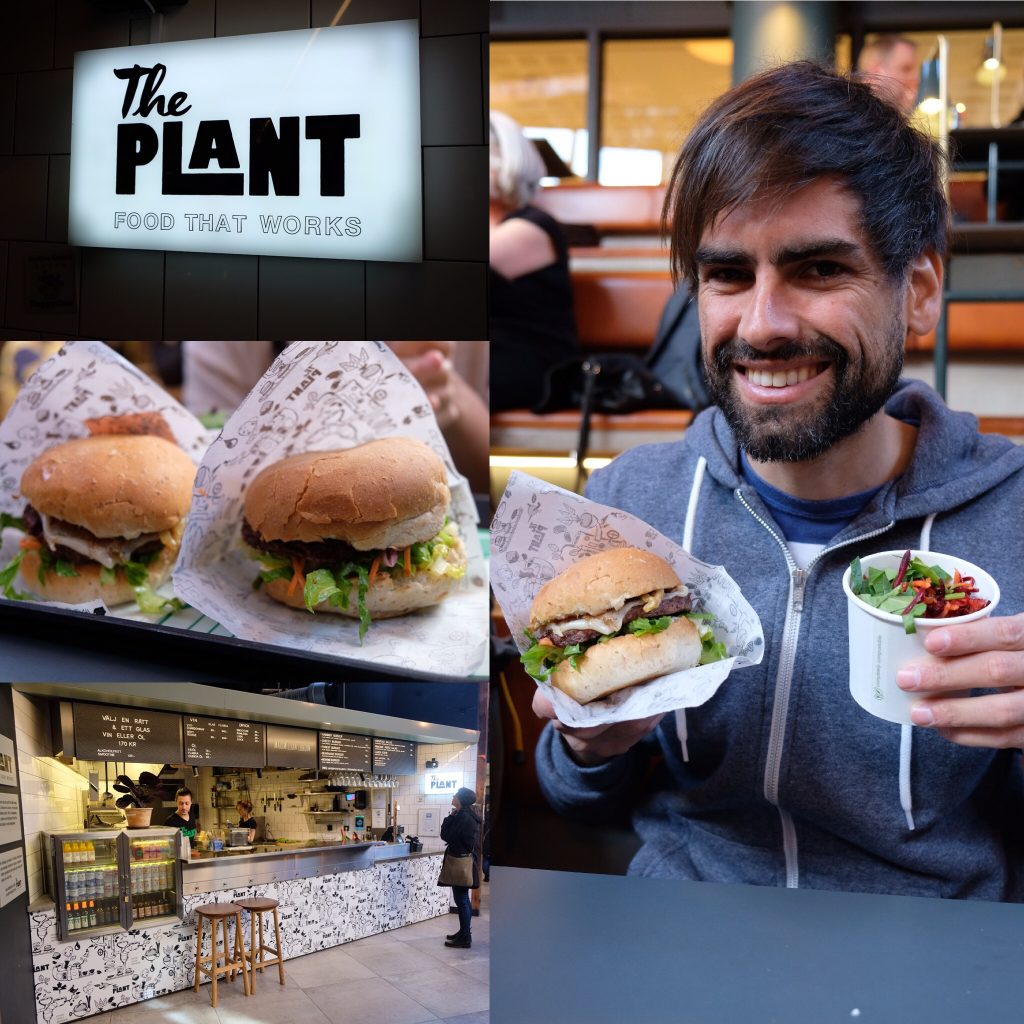 Located in a shopping mall, The Plant – Food That Works offers five kinds of healthy burgers and salads with rich vegan mayonnaise on top.

It’s an ideal location for work as there’re small tables with free WiFi, individual lamps and power plugs. And that’s what we did – we stayed there for work for an entire afternoon after enjoying our meal. 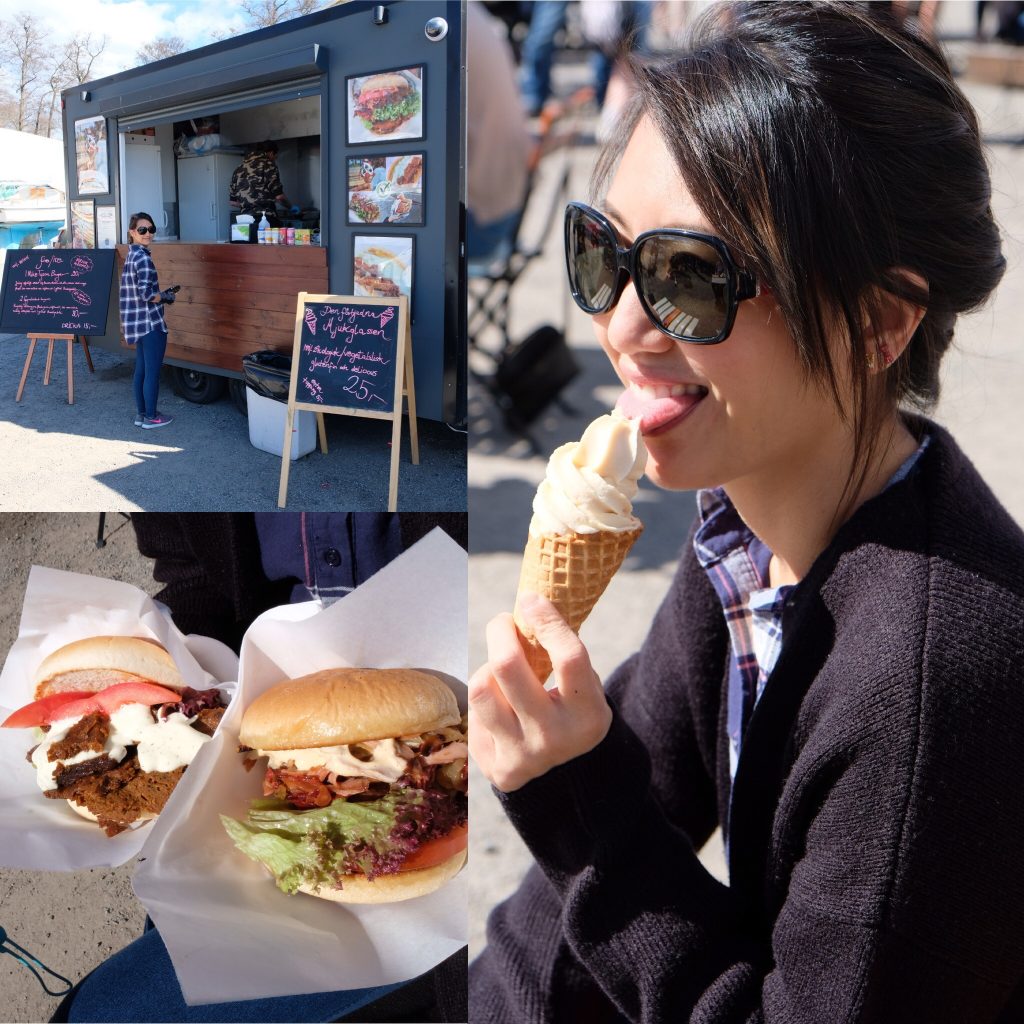 Found this food truck Vegan Soul Train by the sea and we were absolutely in love! We tried both burger options and the vegan ice cream, which were all amazing yet a bit more on the guilty pleasure side. Don’t tell me how many calories were packed into them…I don’t want to know!

The food truck is only open in Spring and Summer…fair enough.

You know how sometimes restaurants in Sweden close at 6pm, like, dinner time? So if you’re starving at 7pm, everything’s closed and you don’t have the option to cook at home, fast food can save your life. 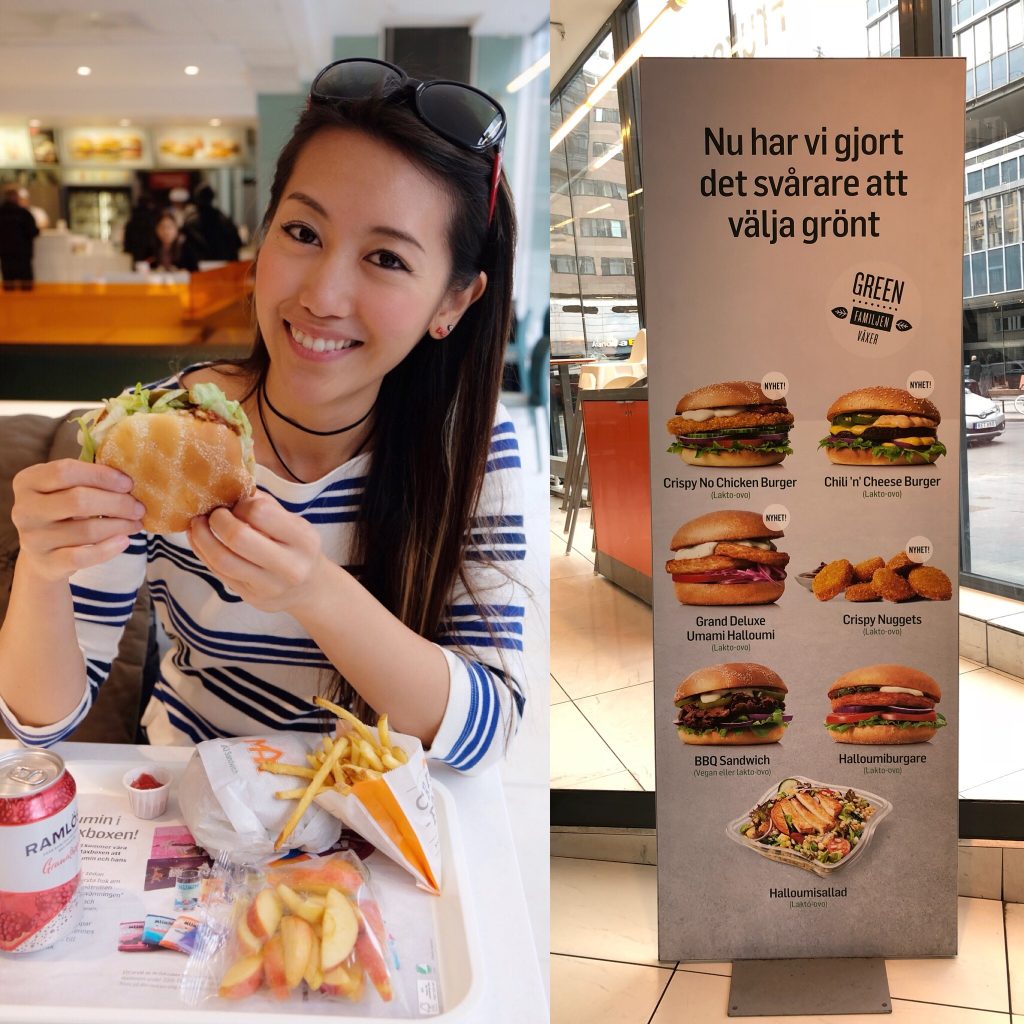 MAX Burgers is a Swedish fast food chain with 6 vegetarian burgers and 1 vegan burger. It’s a lot more expensive compared to other American fast food restaurants, but considering how many veg options there are we decided to give it a try. One of the vegetarian burgers “Crispy No Chicken Burger” can also be made vegan without the sauce. Gluten-free option for buns are available for all burgers.

We had a delicious and very spicy “BBQ Sandwich” with fries and apples. We were also told that they’ll start having vegan mylk shakes in the summer. How I wish I could try!

You can use one of the machines to place your order and pay. 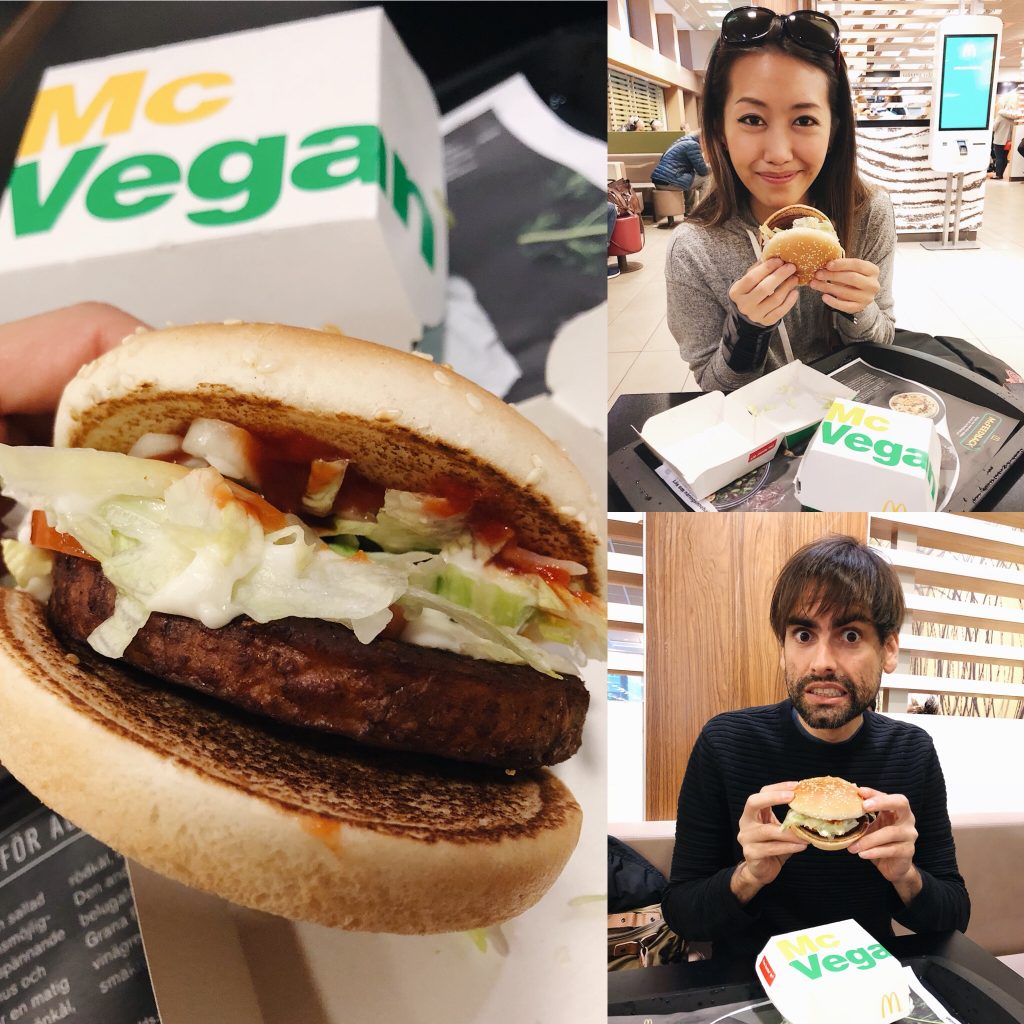 It’s quite embarrassing to admit that I used to love McDonald’s as a kid, even though I hadn’t visited the fast food chain for the past 11 years since I stopped eating meat. Who would have thought I’d be sitting there devouring a McVegan burger with vegan mayonnaise, vegan and gluten-free bun, and non-GMO patty made of soy? It’s like reliving my childhood memory. The burger was created by a Swedish company, and originally available only in Sweden and Finland. It may have extended to other markets as well.

I guess this would be your cheapest vegan option in Sweden. Consider trying if you’re in a hurry or in a dire financial situation…or just for the sake of it. (But don’t eat fast food too much, if you don’t mind me saying.)

Everyone speaks English in Sweden. Like, EVERYONE. But if you want to go grocery shopping, chances are you’ll only see Swedish written on food packages. Google Translate can be your best friend in this case – avoid words like mjölk (milk), smör (butter), ägg (egg), and honung (honey). I won’t list out meat products because there’s too many. Bread in Europe is mostly vegan, so you don’t need to worry much.

But here’s my highlight of all the grocery shopping I’ve done in Sweden – Oatly. Offering products such as oat mylk, oat yogurt, ice cream, creamer and cream cheese, Swedish company Oatly has entered the markets of many European countries, as well as Hong Kong. It’s by far the most amazing plant-based mylk and ice cream I’ve ever had, especially the Barista Edition, which is perfect for making vegan mylk tea. I’m missing it every single day, seriously (see the gray ones on the right). 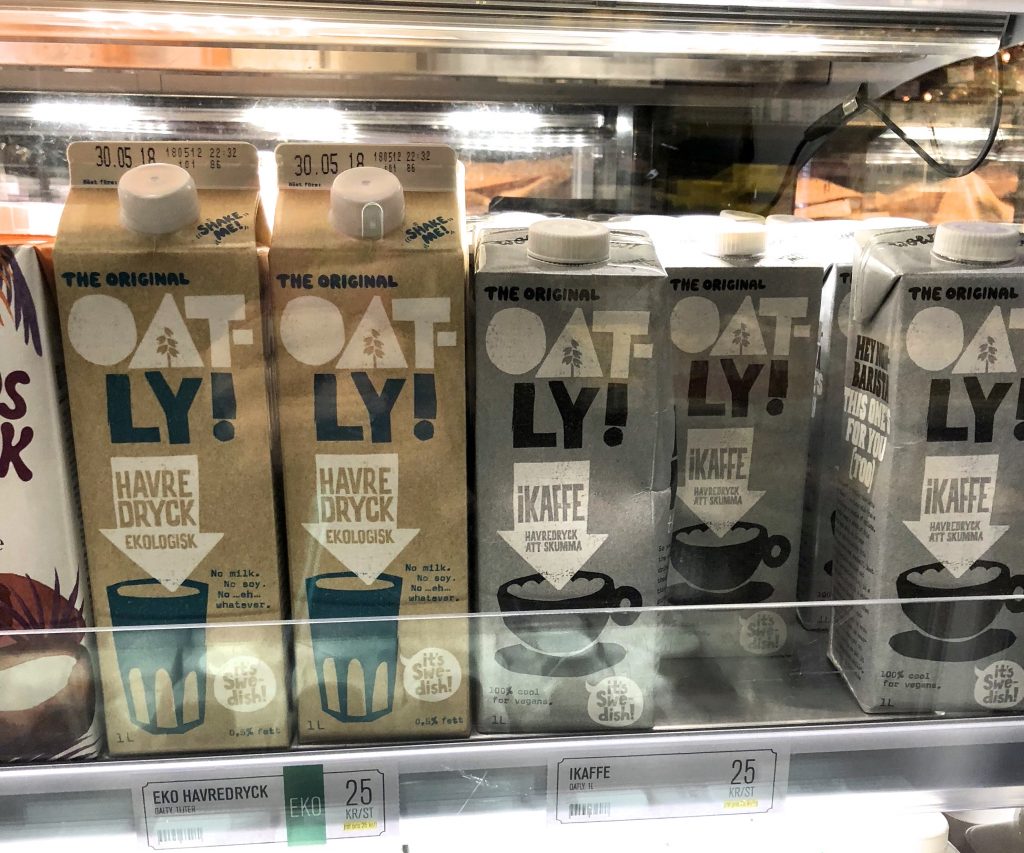 I found it very easy to find plant-based products at grocery stores from breakfast stuff to dinner ingredients, so if you plan on cooking at home it won’t be a problem. We usually only ate out for lunch and had breakfast and dinner at home.

My typical breakfast in Sweden everyday was a box of frozen mixed berries with Oatly’s vegan yogurt. Healthy, delicious, and addictive. Ask our friend Yannick who hosted us in Karlskrona – we got him to start eating this stuff, too! 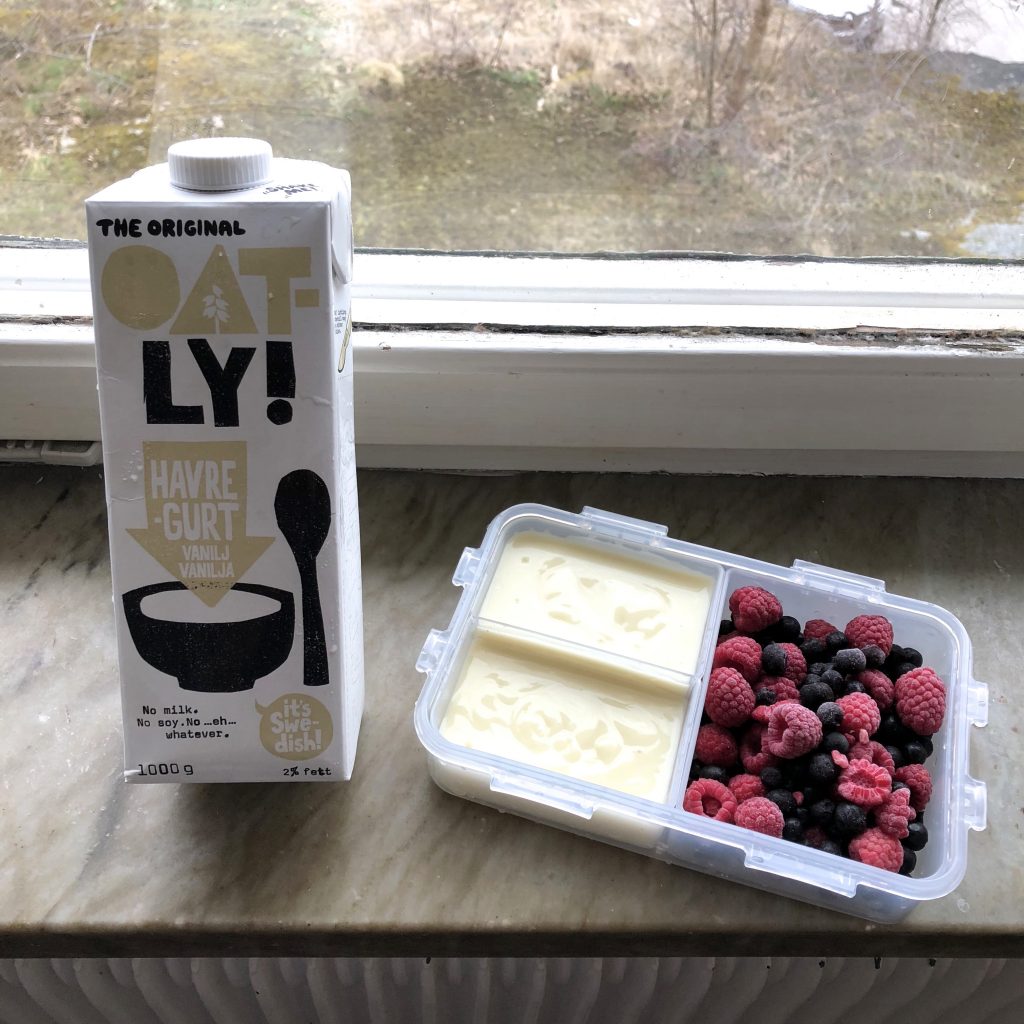 Are you ready to explore Stockholm’s vegan scene? Of course we only had two weeks and wouldn’t be able to cover all the good restaurants in the city. For more information, check out HappyCow.

One last reminder – none of my blog posts are sponsored by any restaurants or brands. Everything I do here is for free as a genuine gesture of sharing information I find useful. As a result, I also don’t have the budget to keep checking back on the places I’ve written about. Before visiting, please check out their Facebook pages for their trading hours and just to make sure they’re still around.

Sweden seems to be moving towards becoming a cash-free country, and most of the restaurants I’ve been to have a certificate on the wall that proudly proclaims “We Are A Cash-Free Restaurant.” So make sure you bring your credit card, and get a local SIM card with 3G so you can purchase bus and ferry tickets.

Related articles about my trip to Sweden:
– Why Do Shops Close at 6pm in Sweden?
– Every Moment Is The Right Moment