Before going to Myanmar last month, many people have warned me that it’s extremely challenging to find vegan food there. My two cents – not true! In fact, Myanmar isn’t really a country that relies heavily on a meat-based diet, so even though vegetarian restaurants are scarce, it’s really not that hard to find vegan food. This article is intended to help those visiting Yangon, Bagan and Inle Lake stick to their plant-based lifestyle while traveling.

First of all, the word for “vegetarian” in Burmese sounds like “ta-ta-lo”, and during the course of 10 days I only encountered once when someone didn’t understand me when I said it. To Burmese, the word “vegetarian” means “vegetables only”, so the chances of having eggs or dairy in your ta-ta-lo meals are slim. Most people I ran into speak English, so most of the time I didn’t even have to show them the piece of paper I prepared with cartoon images of meat, fish, honey, chicken and all the other stuff I don’t eat. 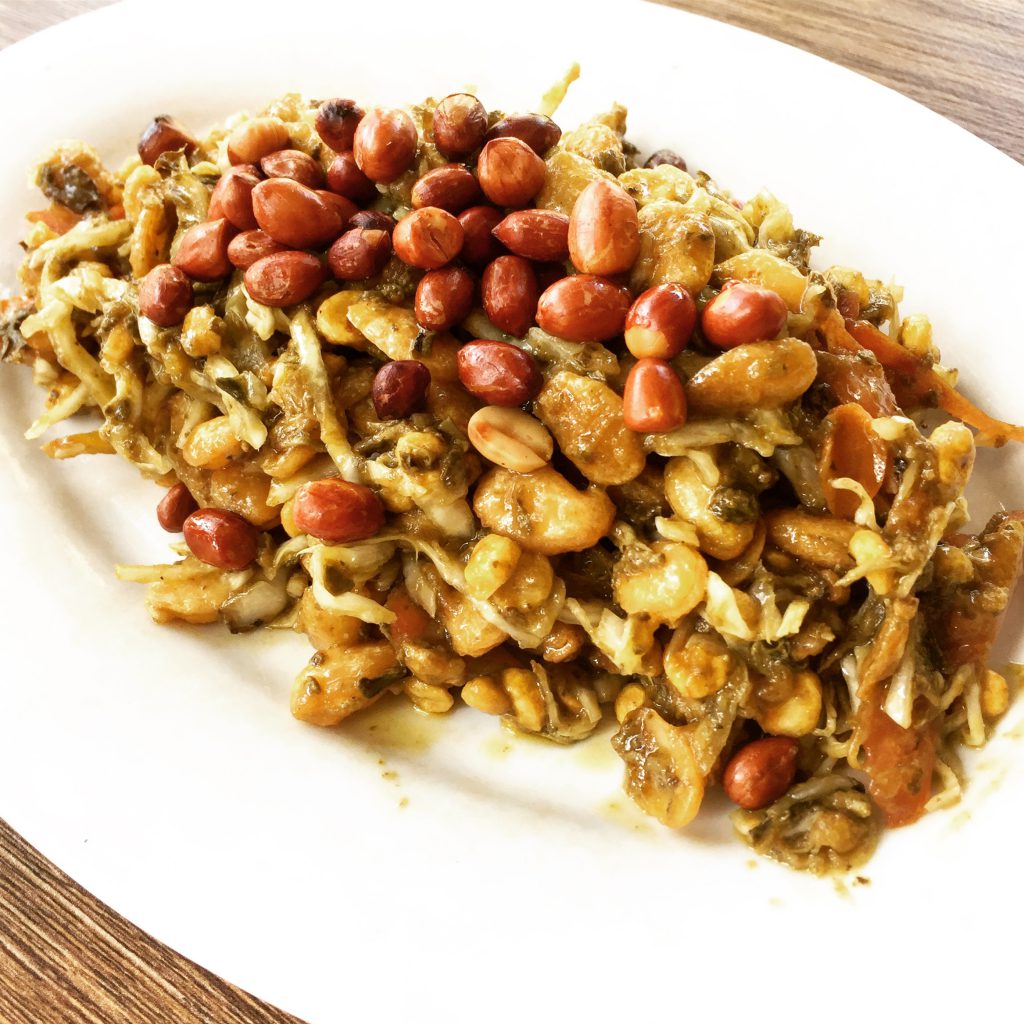 Second of all, tea leaf salads are everywhere and it’s a must-try. They are made from green tea leaves, peanuts, chili, lemon juice, sesame seeds, spicy and crunchy. 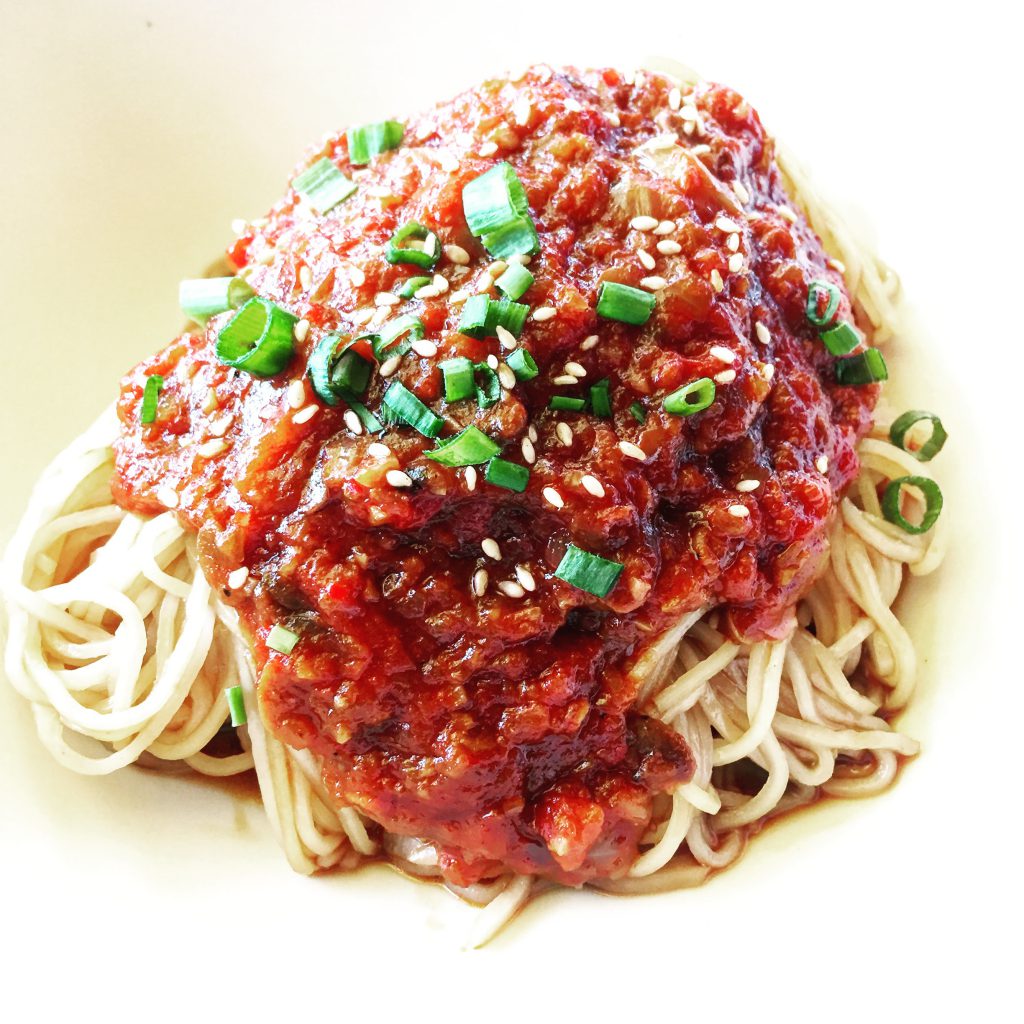 Another commonly seen dish that’s usually vegan is “shan noodle”, because the base is usually made with tomatoes and soy beans.

According to HappyCow, there are five vegetarian restaurants and one vegan restaurant in Yangon. Yes, six in total. I was shocked when I saw that. I mean, my neighborhood in Taipei alone has like, eight. And in the former capital of Myanmar, six?!

Anyway, I visited half of them, and really liked them all. 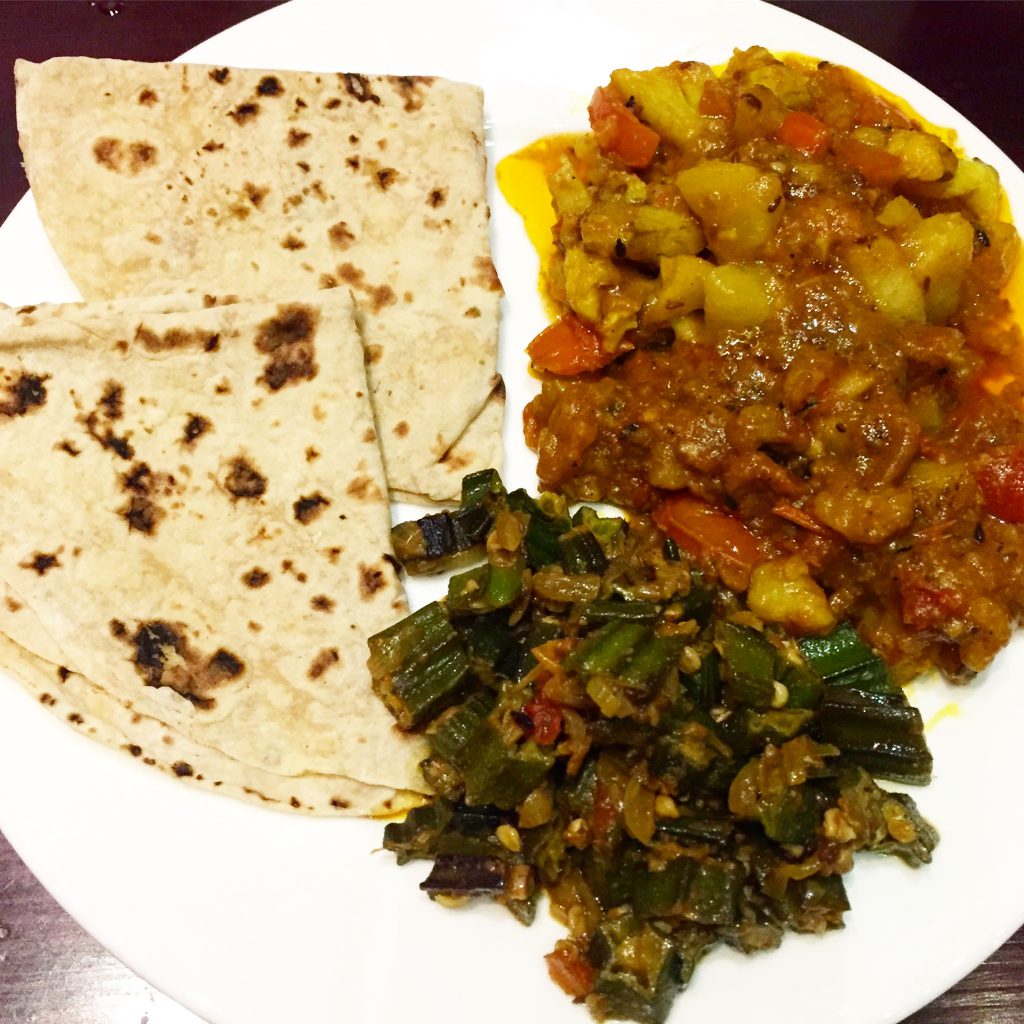 First of all, I’m a big fan of Indian food because it’s super easy to veganize dishes, so seeing many Indian options all over Yangon was already a sign of relief. The food at this restaurant is really nice, but definitely on the greasy and spicy side even though I requested mild spicy. On the day we went, my India-expert boyfriend Narayan was in a work Skype call and couldn’t join. My friend André and I must have sat there for 10 minutes not understanding anything on the menu, written entirely in Hindi. In the end we resorted to google, and were able to order some yummy bindi masala (okra cooked with spices), aloo gobi (potato and cauliflower), and naan!

Remember to ask them to veganize the vegetarian dishes by not adding butter, yogurt or cream! 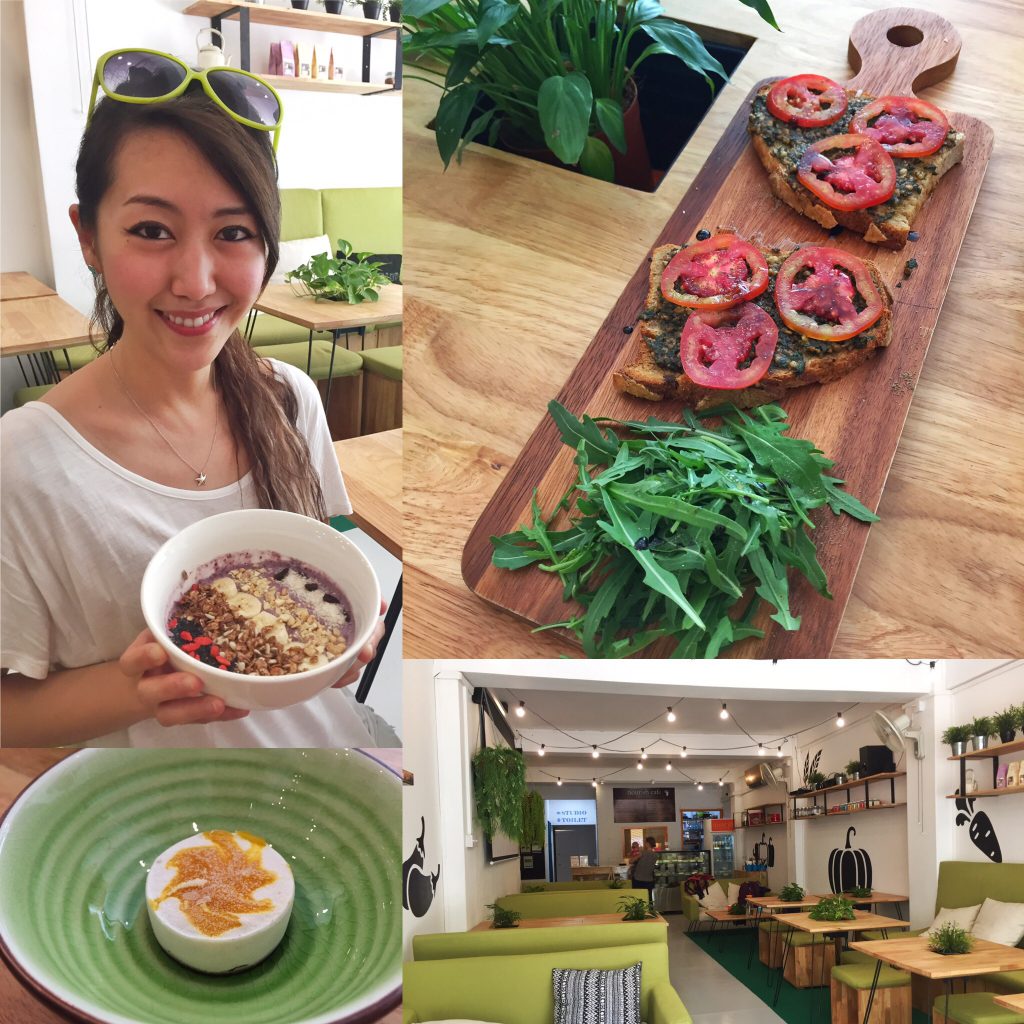 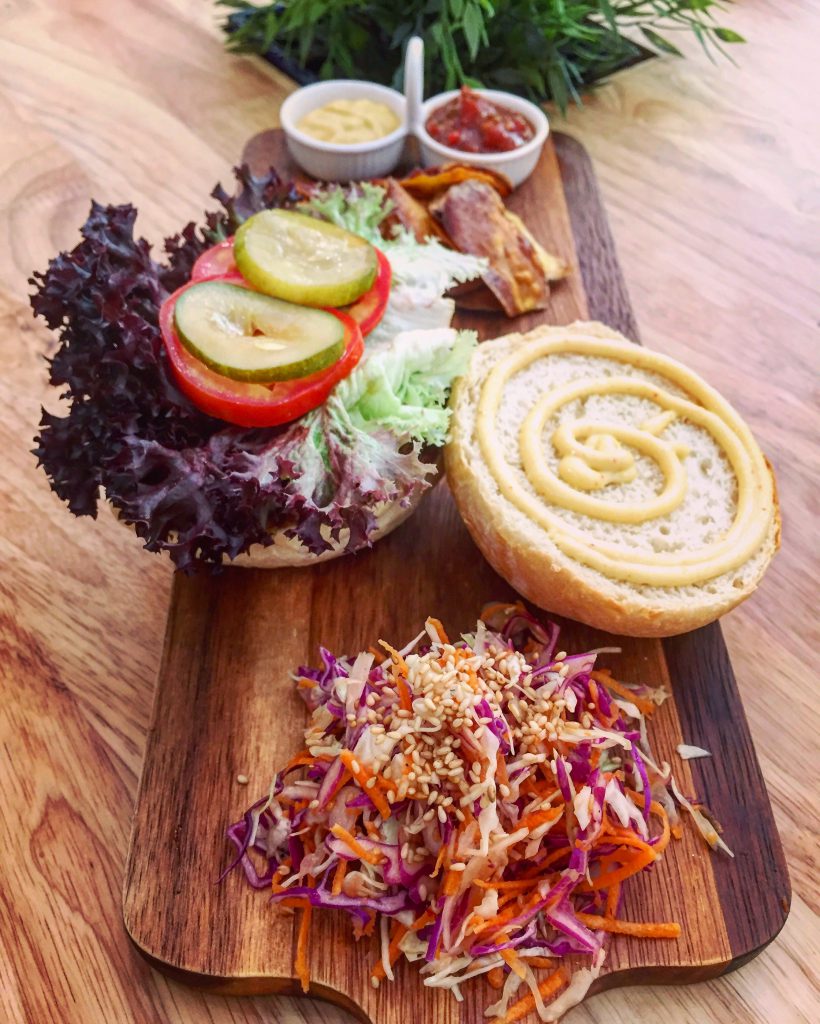 I don’t know if it’s true because I was only in Myanmar for 10 days, but my general impression is that most meals are greasy and spicy. That’s why when we found Nourish Cafe it’s like we found an oasis! We had the Nourish Burger, Sausage Apple Rocket Wrap, Veggie Pesto Wrap, Sourdough Pesto Tartine, Acai Bowl, and Chocolate Chia Pudding. Everything here tastes healthy and delicious, and the atmosphere is nice and cozy. If I had more time I would have tried their yoga classes too, since the cafe is actually a part of the Yangon Yoga House.

Some dishes contain honey, but is clearly marked on the menu. 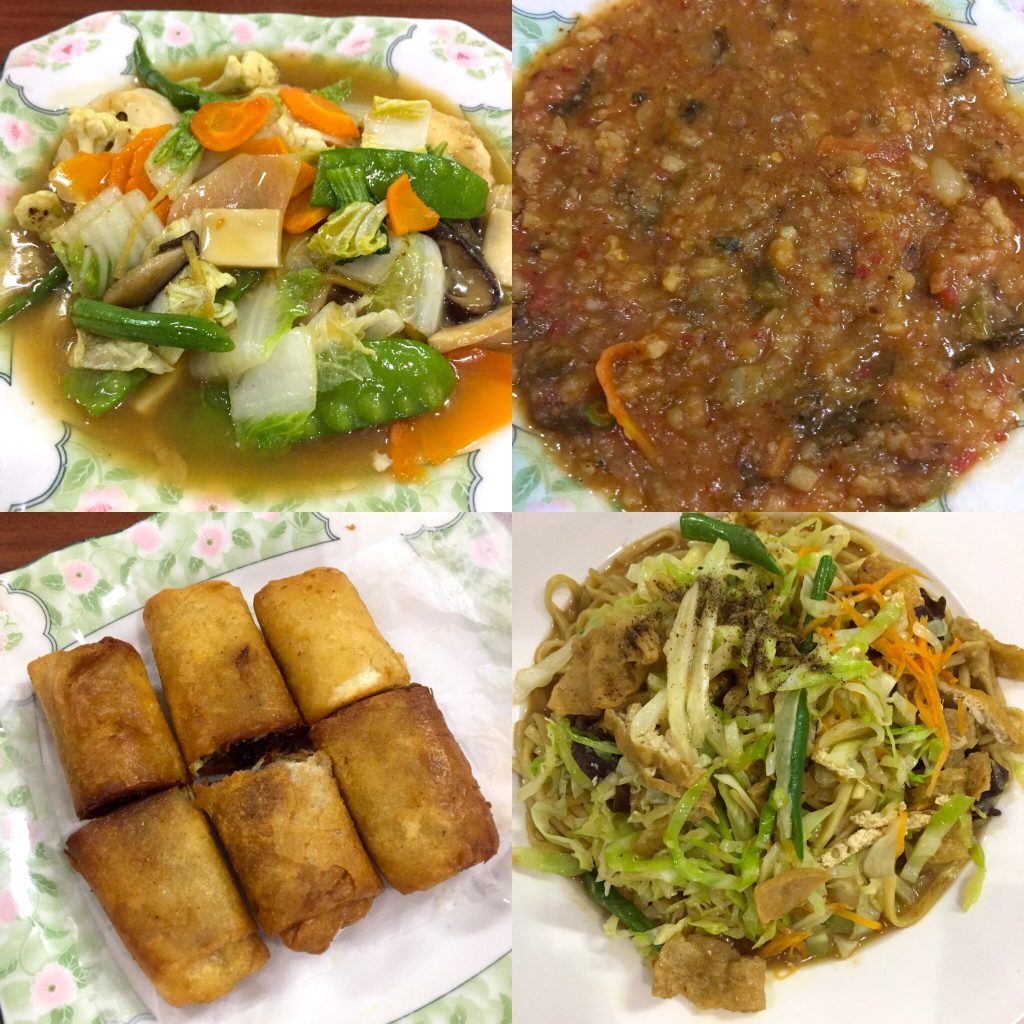 This is a simple restaurant with homemade Chinese food in the heart of Chinatown. The food isn’t too spicy compared to all the other places I’ve dined at in Myanmar. There’re a lot of mock meat options, so if you’re a mock meat person this place would suit you. I really enjoyed the Spring Rolls and Vegetable Fried Noodles. 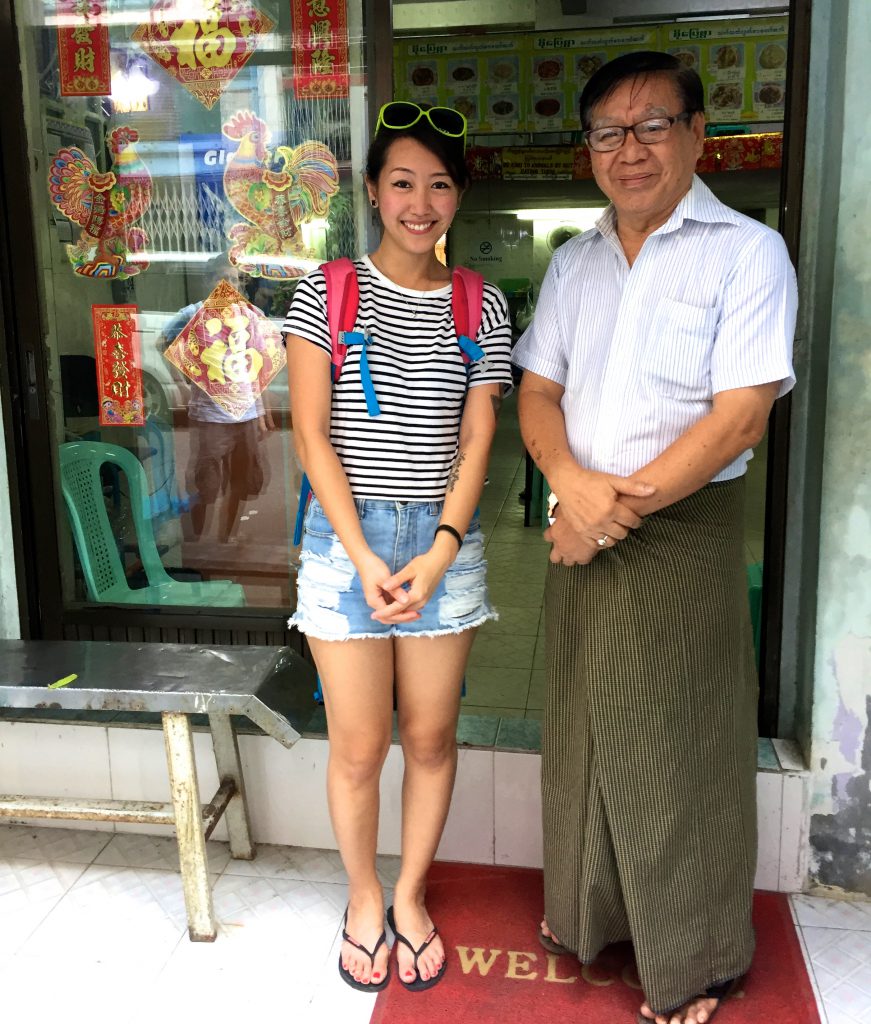 The owner’s family were immigrants from Guangdong Province, and I was able to chat with him in Mandarin. He kind of reminds me of my dad with the Cantonese-accented Mandarin…so I had to take a photo with him! Towards the end of our lunch a waitress walked up to us with a huge sign that says “The customers of this restaurant come from…” with names of different countries underneath. I thought it was cute! 🙂 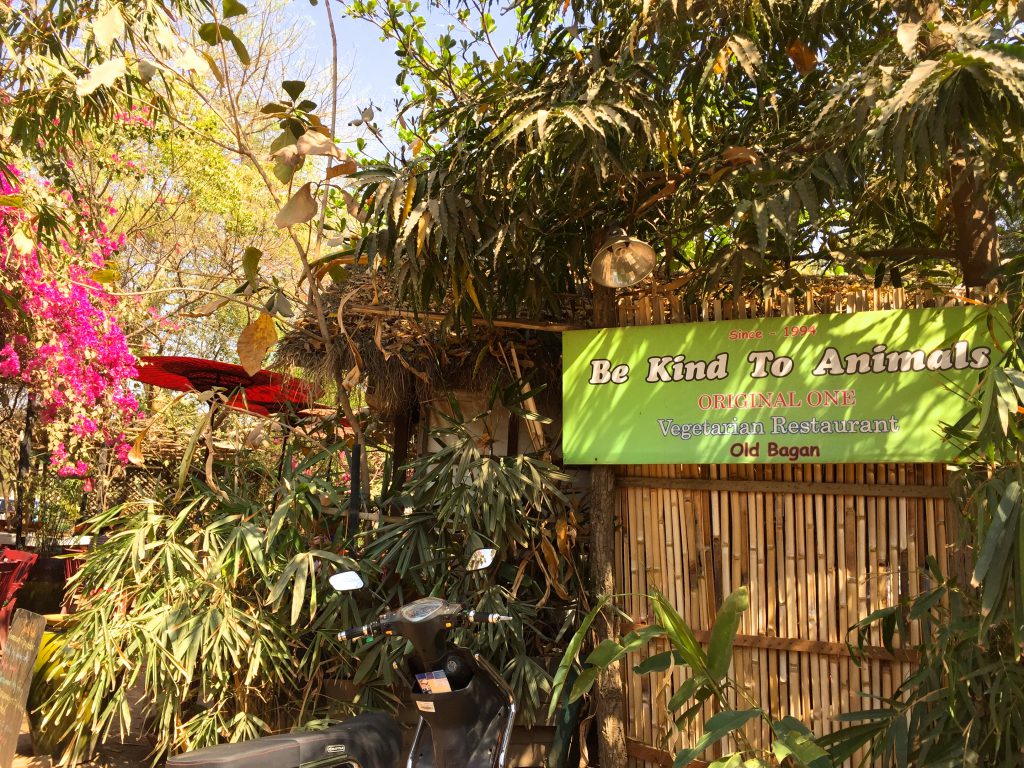 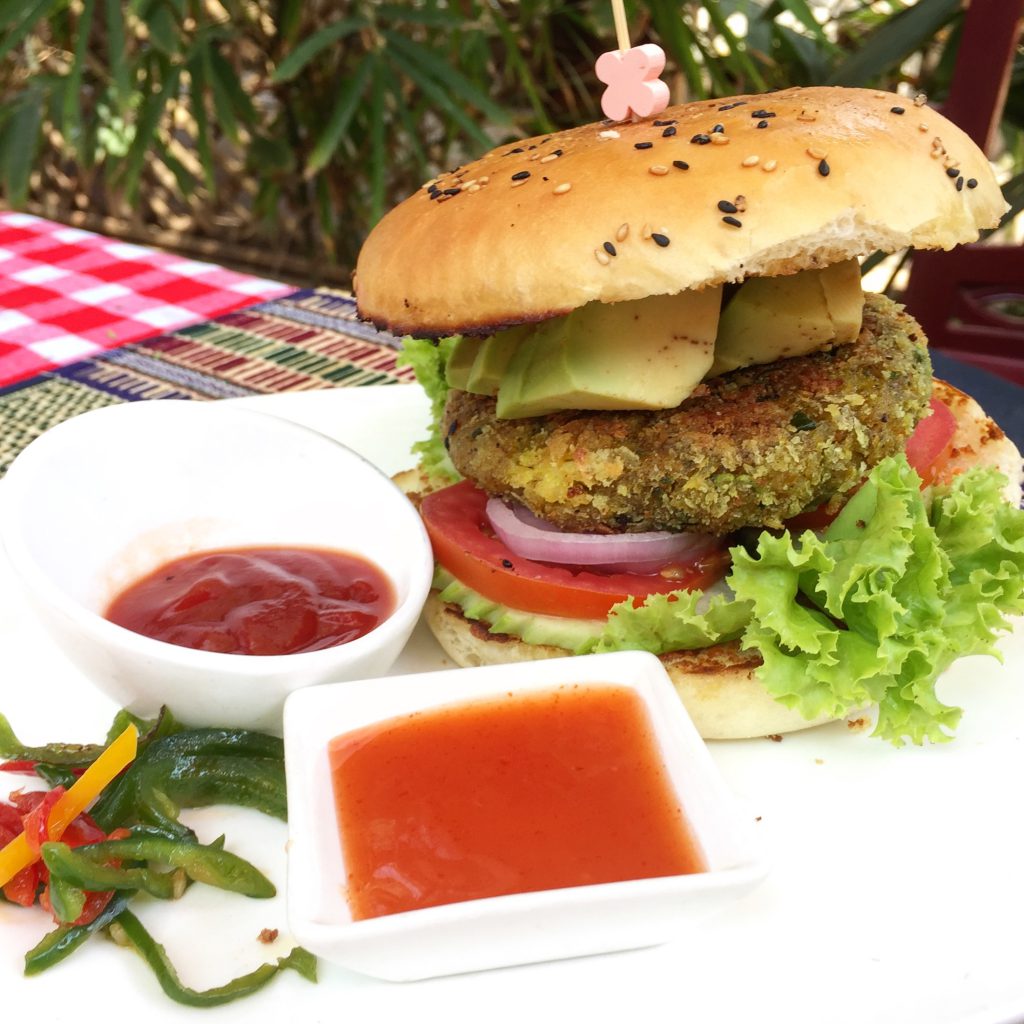 A quick research on Google tells you that “The Moon Restaurant – Be Kind to Animals” is a must-go. There are two locations, one in Old Bagan and another one in New Bagan. I first went to the Moon 2 in New Bagan and was completely blown away. The atmosphere was really nice, with a path leading through the garden to the restaurant. The staff was super friendly and helpful, and there were many vegan options. The experience was so nice that we even tipped, which is not a common practice in the country (and in most of Asia in general).

The original one in Old Bagan also has some nice vegan options, but the service could really be better. The staff weren’t as attentive as the ones in The Moon 2, and it was more crowded. 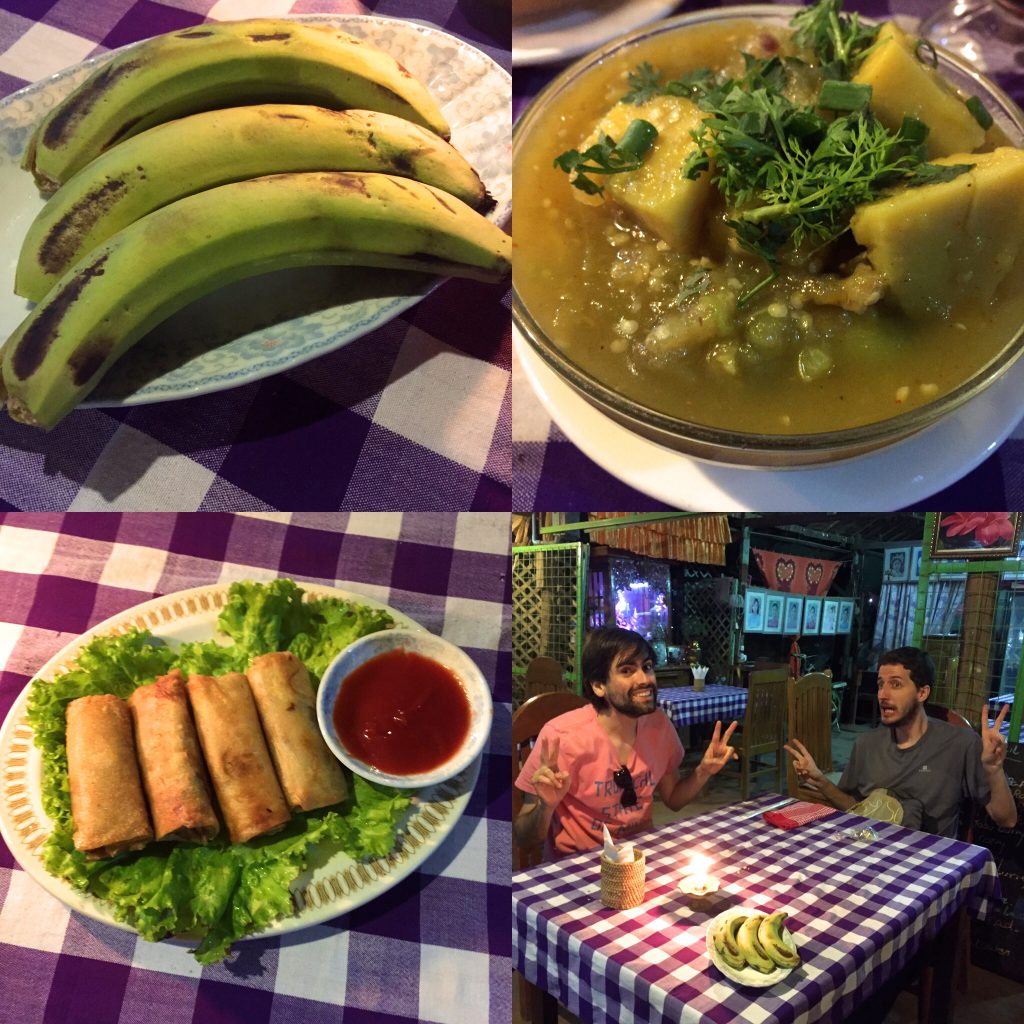 At first I didn’t want to step into the restaurant because I saw it as a copycat of the Moon right across the street. However, I decided to give it a try and was glad I did. The vegetable spring rolls were really nice, and because we actually ordered banana spring rolls and the lady messed up the order, she gave us 3 bananas at the end to compensate! The “fried potato” (which is actually french fries btw) tasted good as well, even though it was pretty greasy.

This place is owned by a friendly family who was very attentive to customers. 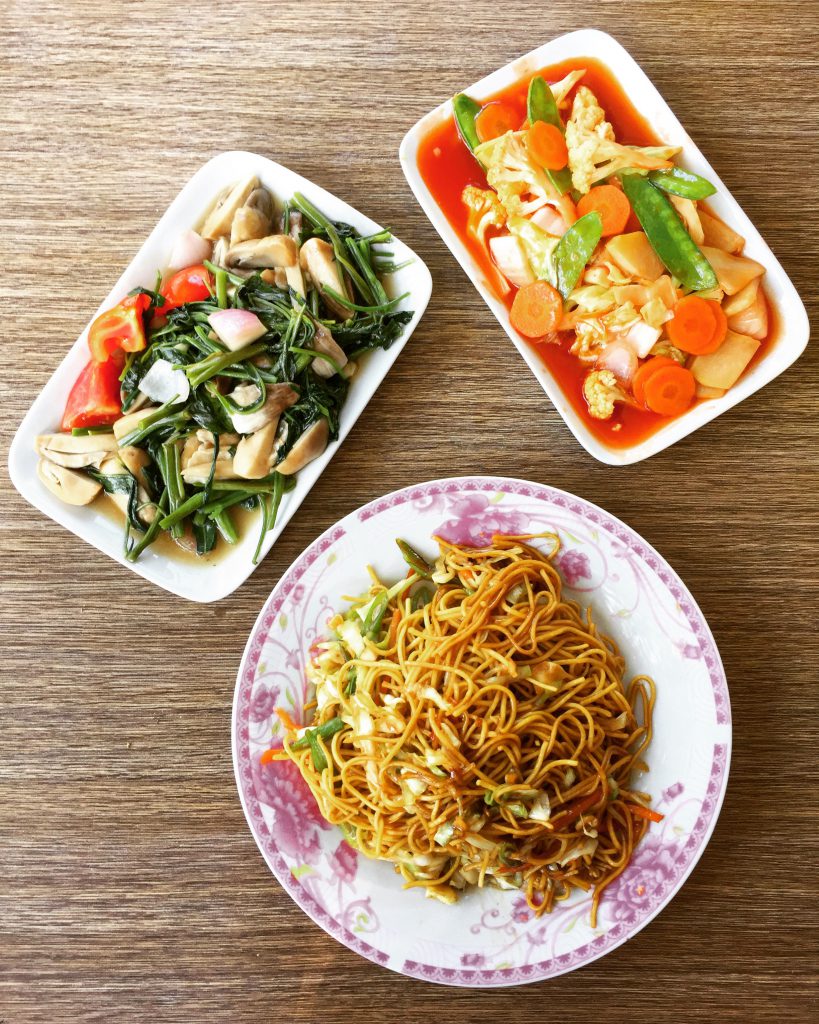 If you’re up for simple dishes like rice, noodles and stir-fried vegetables, this place is for you. I’ve had numerous tea leaf salads during my trip to Myanmar in general, and the best one I had was here. The vegetable fried noodles were nice, but I didn’t like the strawberry juice too much because it was room temperature, and very watery. The family who runs the restaurant was very friendly, and if you’re lucky you’ll get to see cats running around or taking a nap next to your table! 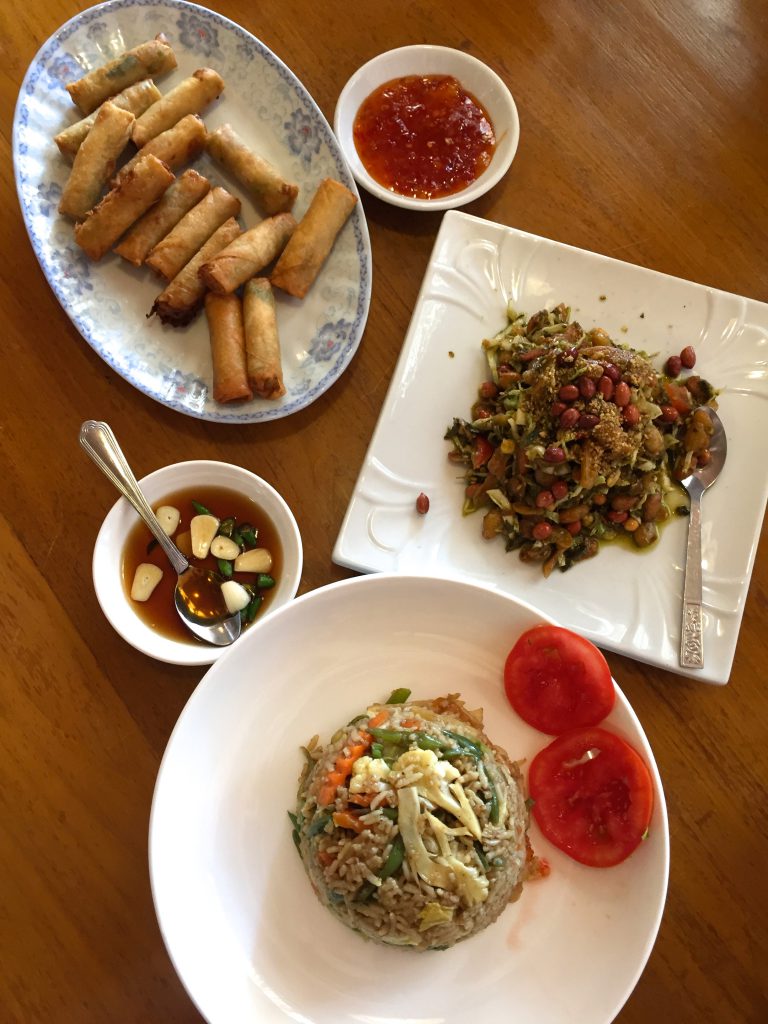 The people who work at the restaurant were very nice, but the service was really slow. When we went there we were starving, and it took more than an hour from the moment we ordered to the moment the food arrived. The spring rolls and tea leaf salad were nice, but don’t order the guacamole – it’s super sweet, and it took us quite some time to add enough salt and lime juice to balance it out. 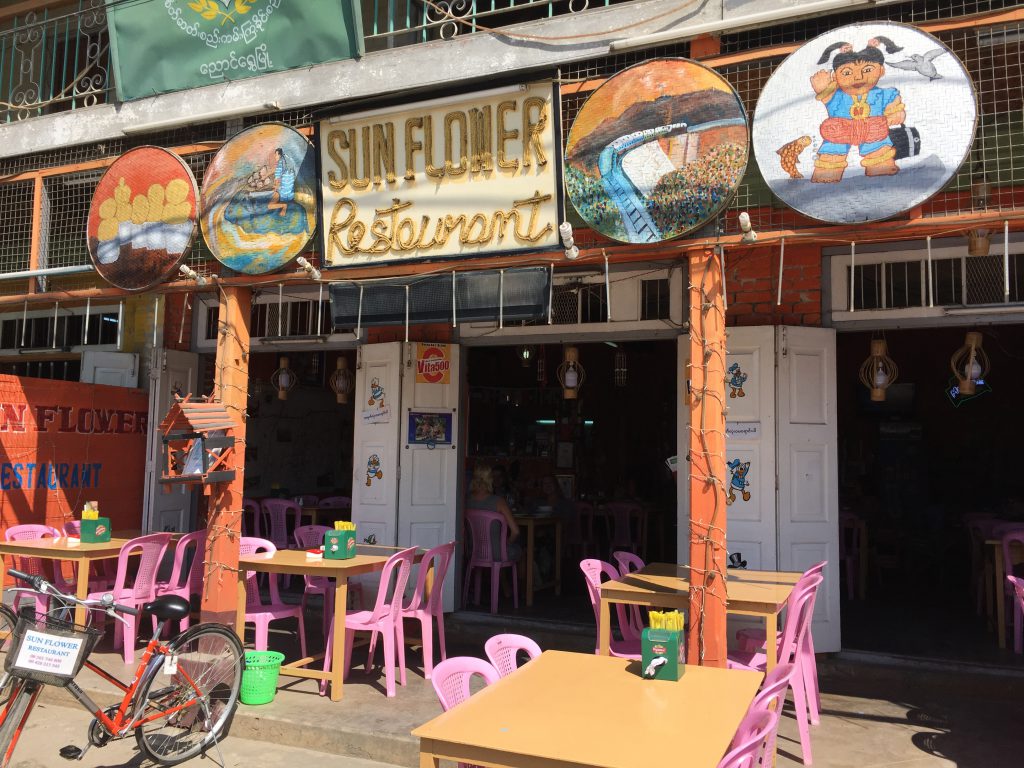 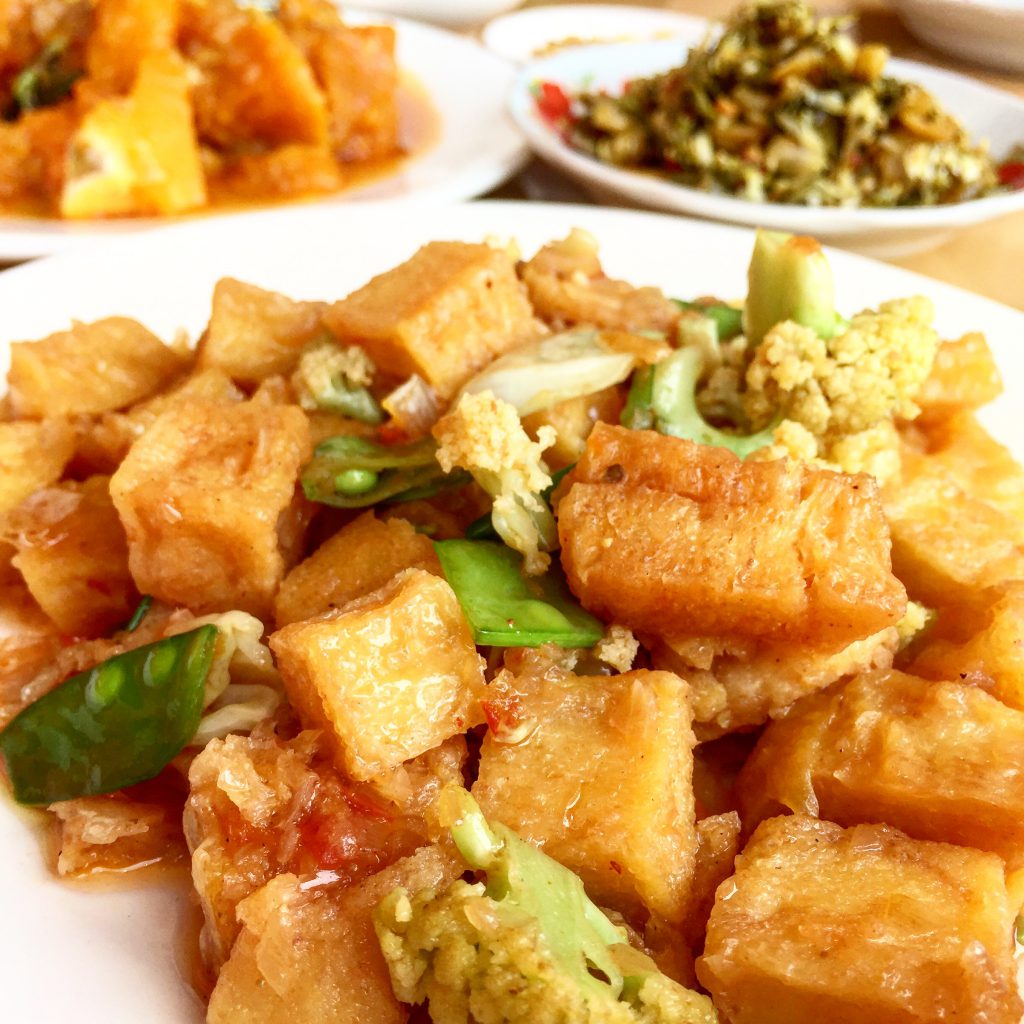 We didn’t go to any vegetarian restaurants in Inle Lake because I only saw one listing on HappyCow, and it was a pancake place. Instead, we tried a restaurant called “Sun Flower”, which offered a variety of vegan dishes, including a vegan combo meal with soup, salad, main dish, rice, and fruits.

Originally I thought about combining “what to eat” with “what to do”, but even I myself was appalled by the length of the article…so I’ll write about the fun things we did in another post. Stay tuned!