I’m a crazy cat lady and I could spend hours looking at cat photos on Instagram, but I don’t often post about cats myself. I used to share my life with two sweet, fluffy and funny cats, Popu and Laguna, until Laguna passed away five months ago. 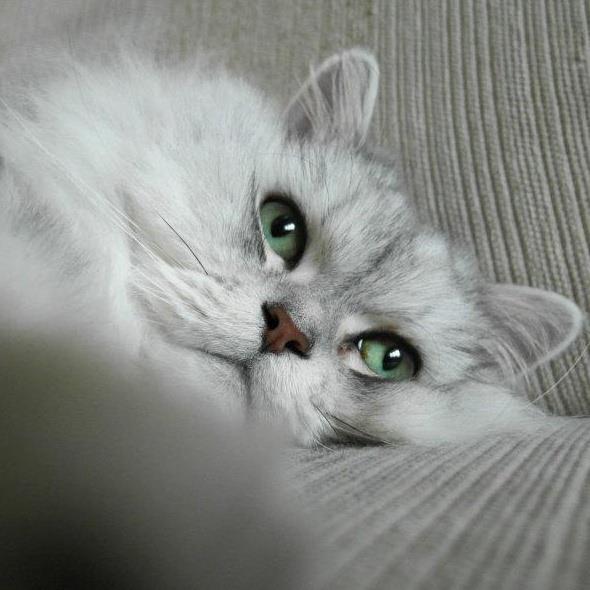 I still remember the feeling of emptiness when I received a phone call telling me Laguna just took her last breath. I was visiting friends and family in California at the time, and knowing that Laguna got sick a few days prior to that, I had already changed my ticket to fly out the next day. But I was still too late. She left before I could see her for the last time. Ever since that day, I’ve been avoiding mentioning my cats. I don’t want to use past tense when I refer to her. I can’t post their photos without being reminded of the fact that she’s no longer here. And only posting photos of Popu would seem like I’m erasing Laguna from my life. Her obvious absence left a void in my heart that I wouldn’t talk about so I could go on with my daily life. 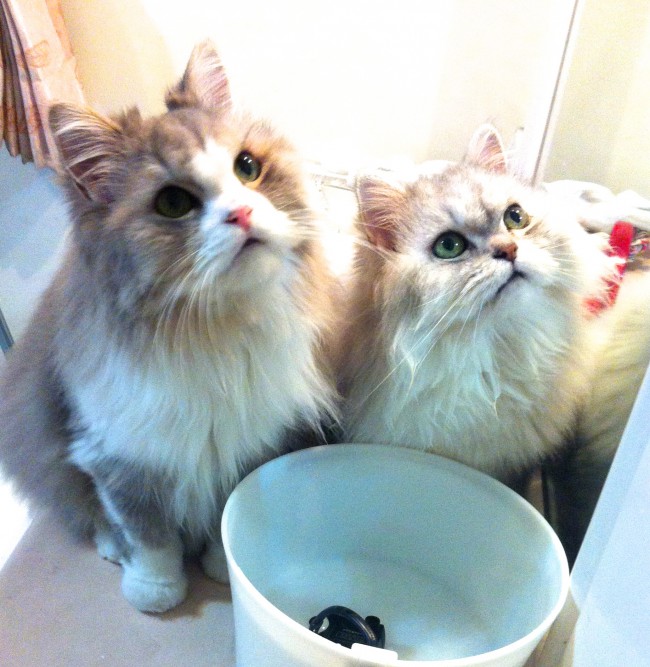 I first met Popu and Laguna on November 4th, 2006. I had been wanting to adopt a cat, and one day a friend told me her boss had a couple “extra” cats that she no longer wanted because they weren’t purebred. I was a bit hesitant about adopting two cats instead of one since I wasn’t sure if I’d have enough time and resources, but knowing they would end up in the shelter if I didn’t take them, I went to pick them up the next day. They were in terrible conditions when I saw them – Popu was having a cold, and Laguna was suffering from respiratory problems that caused her to sneeze every few seconds to the point where she started to bleed from the inside of her nose. I still remember seeing her bloodstain on the floor, on the couch, on the walls, and on everything else she walked past as she sneezed. She used to have fungus more often than not when she first arrived, on her head, neck, back, belly, legs, and tail.

With love and proper veterinary care that they deserved, Popu and Laguna were slowly nursed back to health, even though Laguna’s immune system was still weaker compared to normal cats.

There were many precious moments that I’ll never forget. 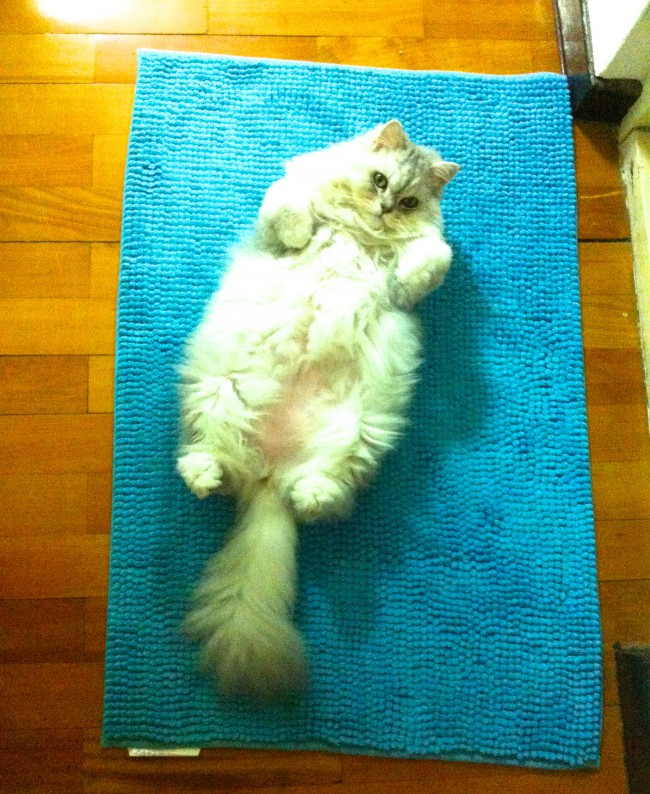 She used to follow everyone everywhere just so she could be kept in the loop of what everyone was up to.

She once walked into the litter box and stood up with her hands hanging in the air while urinating (I have no idea why she did that).

She didn’t like peas and whenever there were peas in her canned food, she would pick them up and throw them on the side.

She tried to wake us up in the morning when she was hungry, but if her attempt failed, she would just fall asleep on top of our heads.

She never whined or struggled when she was at the vet. Once we took her to get micro-chipped, and she acted like nothing happened, while Popu was screaming, hissing, biting and trying to escape in every way he could. The vet told us he had never seen a cat as calm as Laguna.

Popu used to tag along and stay near her all the time. They were siblings and best friends. 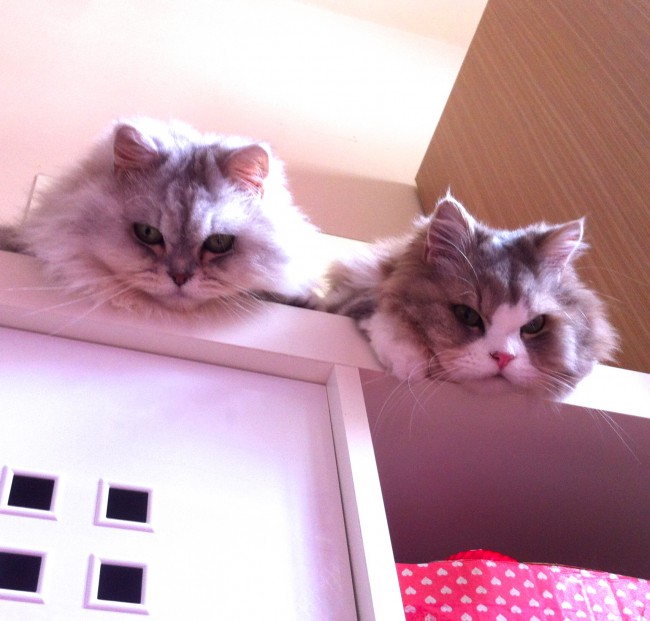 Her favorite toy was a stuffed animal shrimp, which she carried around while meowing and ultimately dropped in front of us as a gift.

She used to love resting on the couch and staring outside the window, watching birds fly by and getting all excited. 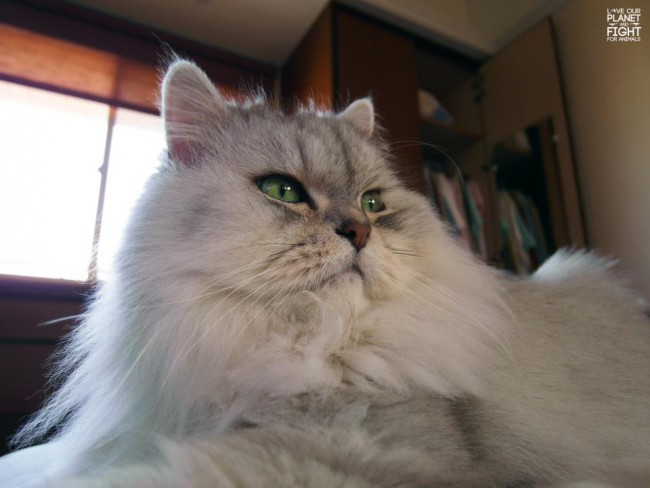 Once we took her to a park and she was super nervous at the beginning, but slowly relaxed and even fell asleep on the picnic mat.

When I was away from home I asked my mom to hand her the phone so I could talk to her. She started licking the mouthpiece when she heard my voice, and I started crying.

She loved lying on my bed while I was working on my laptop, and whenever I turned around I would see her sleeping peacefully like the sweetest angel in the world. 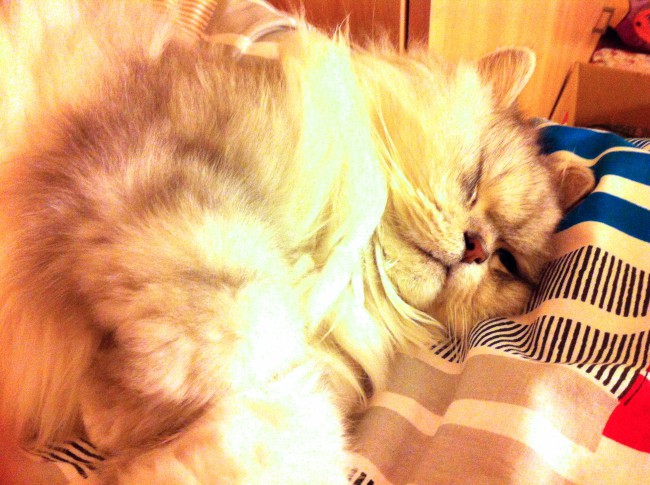 The day we cremated her…it was the saddest day of my life. I stroked her hair like how I used to before she was sent into the crematorium. Her hair was still so white and soft, but she would never respond to my touch with her happy purring anymore.

Laguna was the sweetest cat I’ve ever met and I miss her every single day. I used to say home is where my cats are. Ever since Laguna passed away, I lost the sense of belonging. I know Popu is still here, but it’s no longer the same. Many people tried to comfort me by saying “this is what happens when you have a pet.” No. Laguna was never a “pet”, and I don’t see ANY animals this way. She was and still is a beloved family member whom I’d do anything to protect. 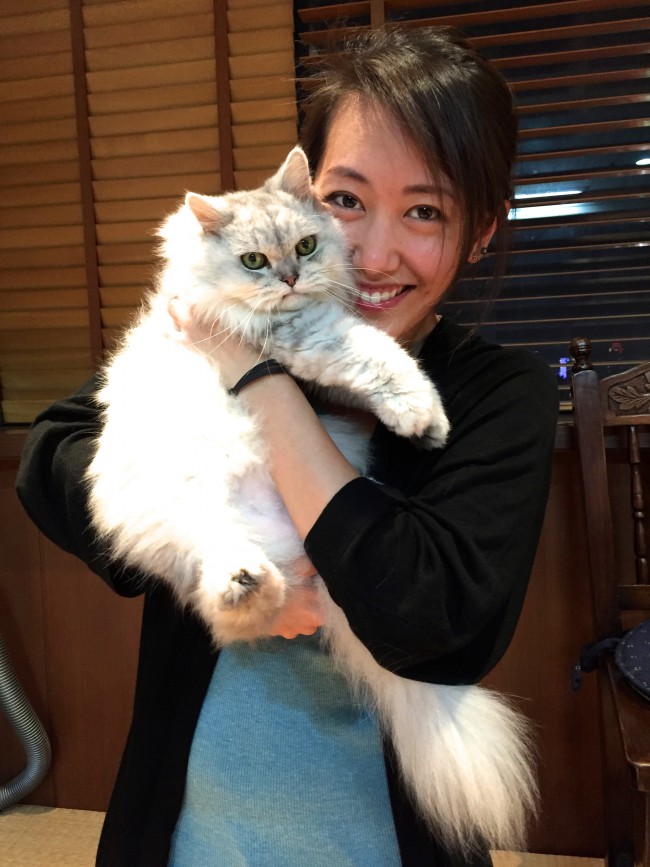 I don’t know how to say goodbye. Have we ever learned the “proper” way? What does it mean when someone you love deeply passed away? It means you can go to the farthest corner of the world, but you still won’t find them there. You carry on your routine and your life, but without them by your side. Sometimes you almost forget they’re gone, but you turn around and they’re not sitting on that favorite couch where they used to sit everyday. Sometimes you see something you know they’d definitely like, but you don’t need to buy it anymore because you have no one to give it to. Sometimes they come to your dream and it’s as if they’ve never left, but you wake up in tears when you realize it was just a dream. 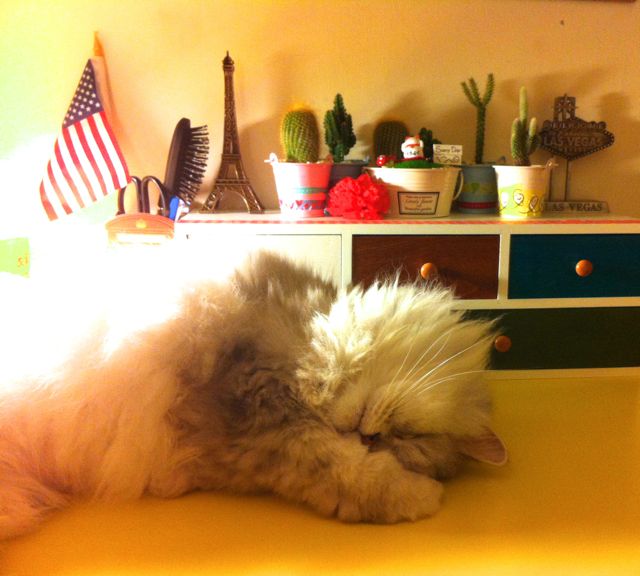 Vietnamese Zen Master Thich Nhat Hanh once told the story of a cloud and the concept of “death”:

“It’s like a cloud in the sky. When the cloud is no longer in the sky, it doesn’t mean the cloud has died. The cloud is continued in other forms like rain or snow or ice. So you can recognize your cloud in her new forms. If you are very fond of a beautiful cloud and if your cloud is no longer there, you should not be sad. Your beloved cloud might have become the rain, calling on you, ‘darling, darling, don’t you see me in my new form?’ And then you will not be stuck with grief and despair. Your beloved one continues always. Meditation helps you recognize her continued presence in new forms. And our nature is the nature of no birth and no death…the nature of a cloud also. A cloud can never die. A cloud can become snow, or hail…or rain. But it is impossible for a cloud to pass from being into non-being. And that is true with your beloved one. She has not died. She is continued in many new forms. And you can look deeply and recognize herself in you and around you.” 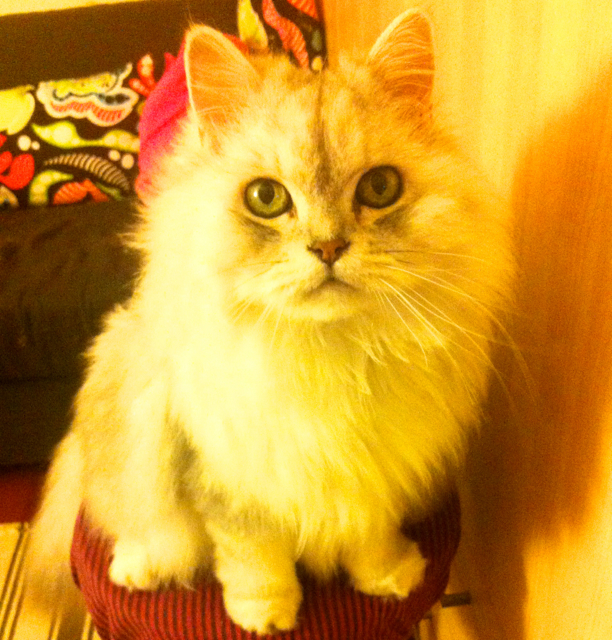 I’m still heartbroken, but I’d like to believe that Laguna, like the cloud, is continuing her journey in new forms. I may not see her anymore, but I know she’s in the air I breathe and the rain that drops on me. Thank you for sharing your life with me and teaching me how to love, how to give, and how to let go. You were the reason why I want to protect all animals, because I realized they’re just like you, fully capable of feeling pain, joy, fear, and love. I love you so much, forever and ever.