Monks, nuns, Buddhism – these aren’t foreign concepts to me. I grew up in Taiwan, where Buddhism is one of the major religions. I have a cousin who’s been a nun for decades.

However, I kind of shunned away from all religions since I have no interest in the ones that use punishment and fear to enslave minds instead of liberate souls and empower individuals to see and respond to the needs of the world we live in.

What I didn’t understand was that the essence of Buddhism is a door for us to enter our inner world and be mindful of our actions and thoughts, and to relieve our own suffering as well as others’. Unlike what I previously thought, it has nothing to do with worshipping a supreme power for our personal gains.

With curiosity and hesitation, I signed up to join the 5-day Wake Up Meditation Retreat at the Thai Plum Village earlier this month, which was a really nice and touching experience. The monastery, established by Vietnamese Zen Master Thích Nhất Hạnh, is located northeast of Bangkok in Pak Chong, and the bus ride from Bangkok was about 4 hours one-way without traffic. 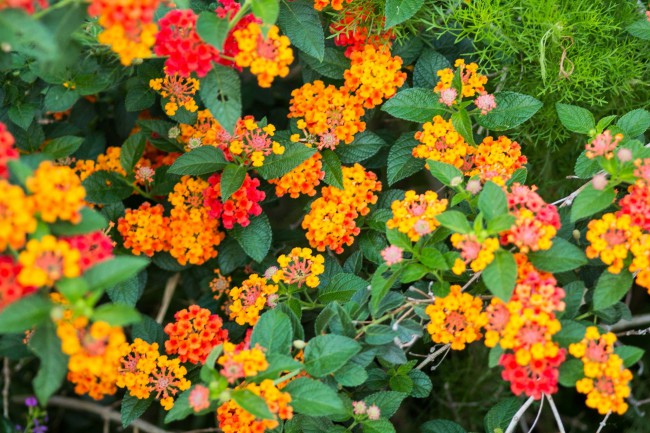 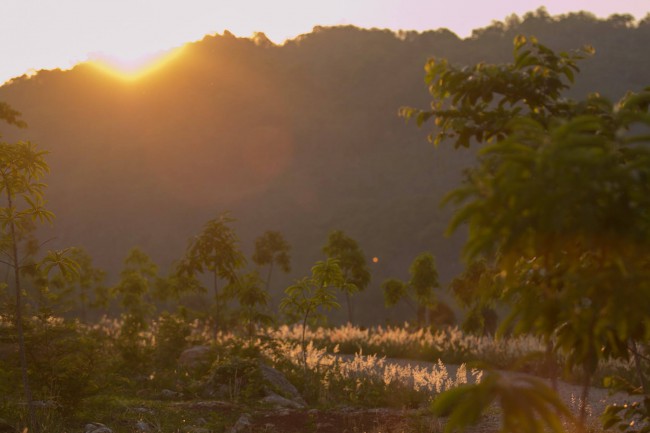 Every morning of the retreat we woke up at 4:30am and began our sitting meditation at 5:15am. After that, it was walking meditation, working meditation, singing meditation, Dharma talks, Dharma sharing, and all the other activities that aimed to help us practice mindfulness. After a full day, we went to sleep at around 9:30pm. We were divided into different families, and I’m a member of the Nectarine Family.

At first, I was really struggling because of the heat and the lack of personal space. We stayed in a dormitory of 12, on hard concrete floor with a thin mat and our own sleeping bags. There was no AC anywhere – bedroom, meditation hall, dining hall, classrooms, etc., and it was almost 40 degrees C (105 degrees F). What’s worse was that we couldn’t wear “revealing” clothing, so I had to wear a jacket over my tank top and put pants on instead of shorts. By the end of the first night I was already thinking to myself: “When can I catch the next bus back to Bangkok?” However, I’m glad I didn’t, because my perception started to change on the second day. Instead of whining internally (because it’d be too embarrassing to do it out loud) and resisting my experience, I decided to embrace it. I realized that by choosing not to enjoy the present moment, I was choosing to reject life itself.

Here are three valuable lessons I took away from the retreat:

#1 I’d like for mindfulness practice to be the most important thing in my life. 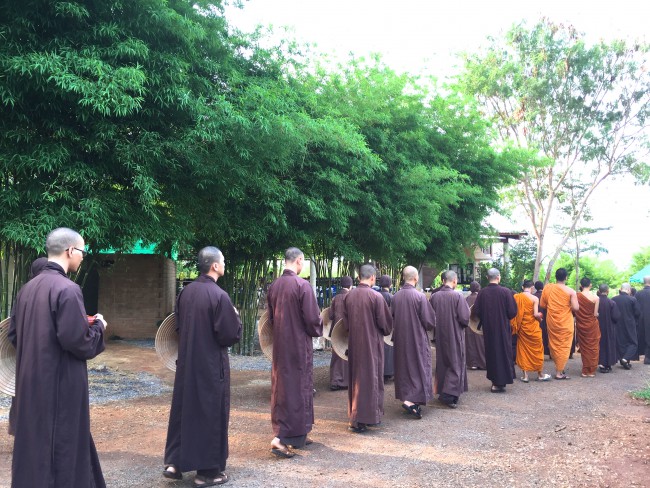 So what exactly is mindfulness? A simple explanation is that we be and act in a mindful way, fully aware of our intentions and our actions. It enables us to live in the here and now, instead of either in the past or in the future. The present is the only thing that’s “real” – everything else exists in our memories or imagination. The majority of the people live our lives without being fully aware and mindful of why we’re doing what we do, and if our actions have any impact on others. We’re trapped in sad memories of the past where we identified ourselves as “victims” of other people’s behavior, and we can’t seem to stop worrying about the future to the point that every present moment serves one single purpose – to lead to a “future” that doesn’t exist, because we only experience everything in present tense.

I’m definitely one of those people, and I’ve always known I wanted to change. However, the motivation to change only surfaced occasionally, and I ended up falling back into the old pattern of thinking and living. Not anymore, I said to myself this time. I’m committed to practicing meditation, yoga, and mindfulness in other ways, such as deep listening, non-violent communication, mindful eating, etc. 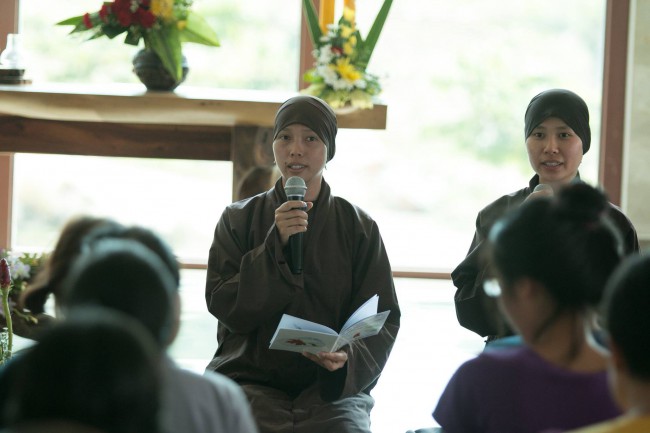 I used to think Dharma talks were for old people who didn’t have better things to do. However, either I’m old now or my assumption wasn’t true at all (or both), I really enjoyed all the Dharma talks we had during the retreat. There was one that particularly resonated with my heart. A Sister from the monastery shared how each of us was born with both wholesome and unwholesome seeds. The wholesome ones include love, selflessness, compassion, kindness, etc, and the unwholesome ones include anger, jealousy, greed, meanness, and so on. How we are as a person is based on how much we’ve watered our seeds. If we’ve spent a lot of energy watering the seeds of love and compassion, we become a loving and compassionate person. We have to be diligent about what we water, and avoid watering the unwholesome ones if we wanted to avoid the dark path (I couldn’t help thinking of Anakin Skywalker).

Another lesson I learned during the talk was that if we want to liberate others, we have to set ourselves free first. This pointed out my lifelong issue, that I’m always concerned about “saving” others from suffering and harm, but haven’t put much emphasis on freeing myself from attachments or allowing my emotions to flow. Since the retreat, Narayan and I have been watching Dharma talks every other day on various topics. I highly recommend that you try, too.

#3 There’re people who would give up everything just to help others be free.

I live a pretty simple life. My only expenses are travel-related and for basic survival like food, drinks, utilities, rent, etc. I don’t have a whole wardrobe of new clothes like many girls do, and I’m still using makeup products that my friend gave me as a present four years ago (hmm…did they expire?!). My maximum budget for a haircut is $4 when I’m in Asia, since I only need a bit of trimming and nothing fancy. However, there are people who willingly live a MUCH simpler life to be free from wanting and any attachment. They shave their head, wear the same style of robe every day, live in a monastery without luxury, meditate for hours a day, and strictly follow a set of principles. 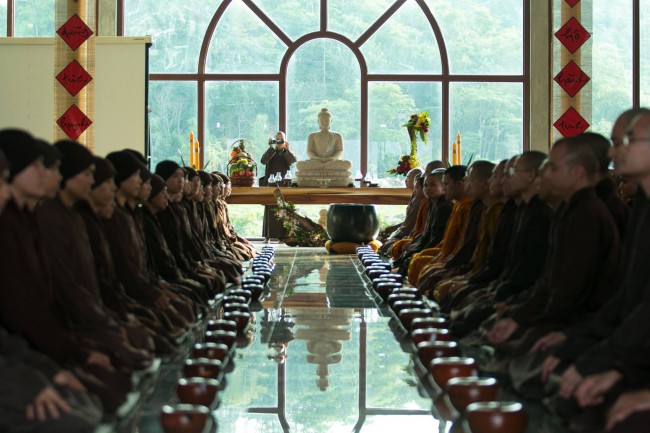 On the forth night, we watched a video that the monastery produced for us as some tangible harvest of the retreat. I realized for the first time how much effort the monks and nuns must have put in to organize this retreat and make sure everything goes smoothly. There was one scene from the video where a monk was cooking vegetables in a giant wok. It was clear that it was extremely heavy to stir the food, and it required more than one man to lift the wok up. There were 350 participants in the retreat, plus the 150 monks and nuns who live there. Every single day, people from the monastery cooked for 500 people, three times a day.

I had imagined the food there must have been terrible, but instead of being plain and blend, every single meal I had at the village was amazing. There were Vietnamese pho soups, banh mi (sandwich), porridge, fried noodles, fried rice, even Thai-style soy milk tea. Everything was simple, but very tasty. I mentioned this to a Brother, who responded, “of course, all the meals were prepared with love.” I thought to myself, it really is true. When something’s done with love, you can feel it. 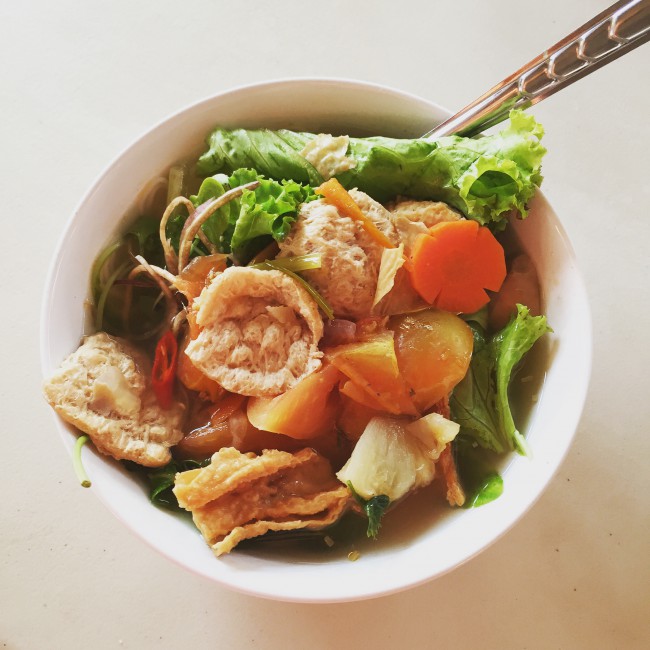 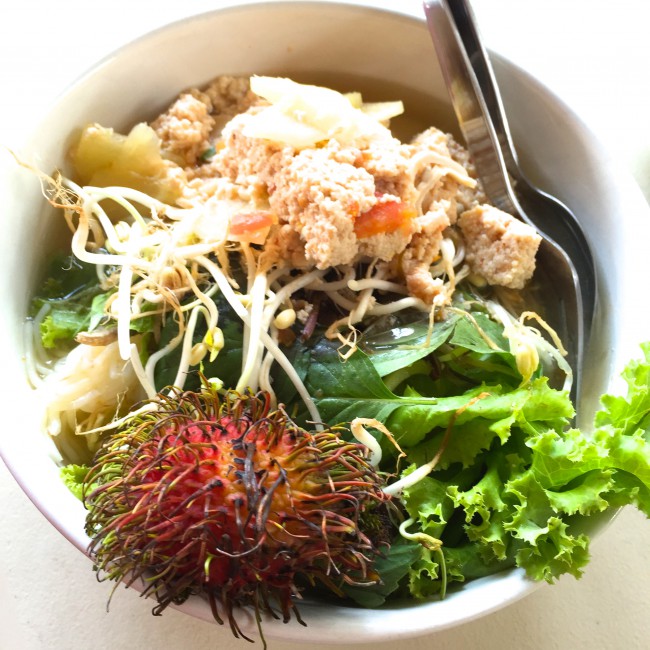 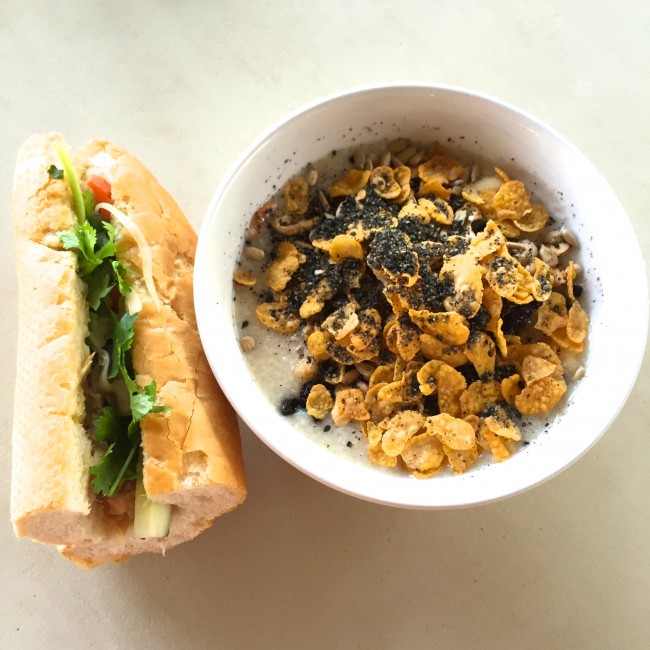 That wasn’t the only thing they did for us. They cleaned the bedrooms, bathrooms, prepared the meditation hall, prepared each day’s talks and agenda, did individual consultation, answered our questions, and most importantly, gave us their full attention and presence. It’s a group of selfless, dedicated individuals who are devoted to setting themselves and others free, who do so out of unconditional love, and never ask for anything in return.

The 5-day retreat only cost about $90, which included transportation, meals, lodging, and all the teaching and activities. It brought tears to my eyes when I thought about how much I was being cared for and loved by the community.

The name of this retreat is called “Wake Up”. To me, the first time I really woke up was 10 years ago, when I was in the best shape of my life. I started reading The Power of Now, A New Earth, The Secret, and all those books that made me feel enlightened. Everyday I woke up in a state of bliss, fully embracing what life has to offer and opening up to people around me with compassion and acceptance. Somehow, I’ve lost it over the past few years. Once again, I chose to pretend all the dramas in my life were real when I knew they were merely created by my mind. I chose to walk as if I was sleeping just so it’s easier to fit in.

After the retreat, I have the courage to stay awake again. I know it takes a lot of work and a lot of unlearning, but the journey has begun. Would you like to join me on this path?

Some images were provided by Thai Plum Village